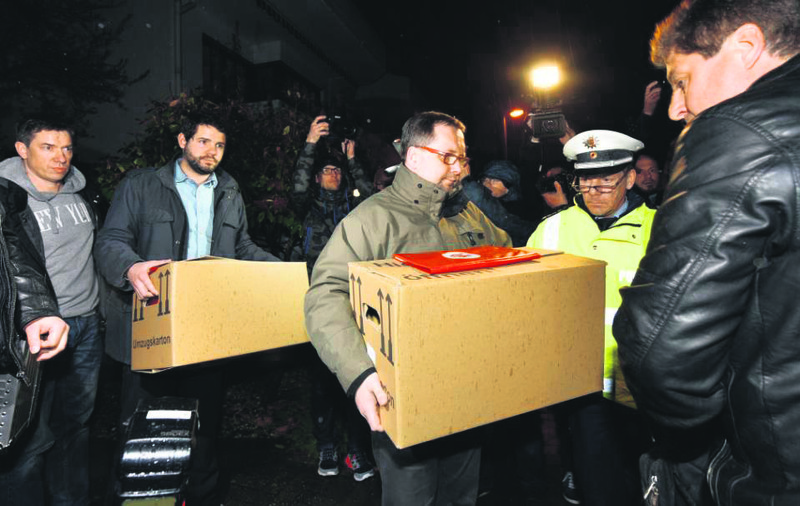 Investigators carry boxes from the apartment of Germanwings airliner co-pilot Andreas Lubitz.
by Compiled from Wire Services Mar 28, 2015 12:00 am
Germanwings co-pilot searched the Internet for information for cockpit doors as well as on how to commit suicide, days before the crash, German prosecutors said on Thursday.

Andreas Lubitz also appears to have hidden evidence of an illness from his employers, including having been excused by a doctor from work the day he crashed a passenger plane into a mountain, prosecutors said on Friday.

The evidence came from the search of Lubitz's homes in two German cities for an explanation of why he crashed the Airbus A320 into the French Alps, killing all 150 people on board. Prosecutor's spokesman Ralf Herrenbrueck said in a written statement that torn-up sick notes for the day of the crash "support the current preliminary assessment that the deceased hid his illness from his employer and colleagues." Such sick notes from doctors excusing employees from work are common in Germany and issued even for minor illnesses. Herrenbrueck didn't reveal details of what illness Lubitz was suffering from.

Herrenbrueck said other medical documents found indicated "an existing illness and appropriate medical treatment," but that no suicide note was found. He added there was no indication of any political or religious motivation for Lubitz's actions. Germanwings, a subsidiary of Lufthansa, refused to comment on the new information. Investigators had removed multiple boxes of items from Lubitz's apartment in Duesseldorf and his parents' house in Montabaur, near Frankfurt.

A German aviation official told The Associated Press that Lubitz's file at the country's Federal Aviation Office contained a "SIC" note, meaning that he needed "specific regular medical examination." Such a note could refer to either a physical or mental condition, but the official, who spoke only on condition of anonymity because he was not authorized to release the information, said the note does not specify which.

However, neighbors described a man whose physical health was superb. "He definitely did not smoke. He really took care of himself. He always went jogging. I am not sure whether he did marathons, but he was very healthy," said Johannes Rossmann, who lived a few doors down from Lubitz's home in Montabaur.

German news media painted a picture of a man with a history of depression who had received psychological treatment, and who may have been set off by a falling out with his girlfriend. Duesseldorf prosecutors, who are leading the German side of the probe, refused to comment on the anonymously sourced reports, citing the ongoing investigation. Lufthansa CEO Carsten Spohr said there was a "several-month" gap in Lubitz's training six years ago, but would not elaborate. Following the disruption, he said, Lubitz "not only passed all medical tests but also his flight training, all flying tests and checks." The U.S. Federal Aviation Administration had issued Lubitz a third-class medical certificate. In order to obtain such a certificate, a pilot must be cleared of psychological problems including psychosis, bipolar disorder and personality disorder "that is severe enough to have repeatedly manifested itself by overt acts." The certificate also means that he wasn't found to be suffering from another mental health condition that "makes the person unable to safely perform the duties or exercise the privileges" of a pilot's license. French investigators, who are in charge of the probe into the plane crash, believe the 27-year-old locked himself inside the cockpit and then intentionally smashed the Germanwings plane into a mountainside on Tuesday during a flight from Barcelona to Duesseldorf.

Germanwings, a low-cost carrier in the Lufthansa Group, said it was setting up a family assistance center in Marseille for relatives of those killed in the crash. "In these dark hours our full attention belongs to the emotional support of the relatives and friends of the victims of Flight 9525," Germanwings CEO Thomas Winkelmann said in a statement.

As investigators probe why a young German pilot deliberately crashed an Airbus A320 passenger jet into the French Alps on Tuesday, pilots and psychologists warn there is no foolproof way to prevent similar incidents in the future. German tabloid Bild reported on Friday that Lubitz received psychiatric treatment for a "serious depressive episode" six years ago, and the crash has prompted calls for more rigorous mental health and stress tests for pilots.

The International Civil Aviation Organization (ICAO), the U.N. body that sets global aviation standards, recommends that someone with depression should not fly a plane. But it also states in its Manual of Civil Aviation Medicine that psychological tests of aircrew are "rarely of value" and not "reliable" in predicting mental disorders. David Powell, an aviation medicine specialist in New Zealand, said there were only 10 air crashes involving medical issues in an ICAO study of 20 years of global incidents. "Could you reliably ensure that you'll never have an airline pilot suddenly, deliberately crash aircraft?" he said. "Pilots are a highly screened population and highly scrutinized, but who can totally predict the behavior of human beings?" Several airlines have responded by requiring a second crew member to be in the cockpit at all times, already compulsory in the United States.