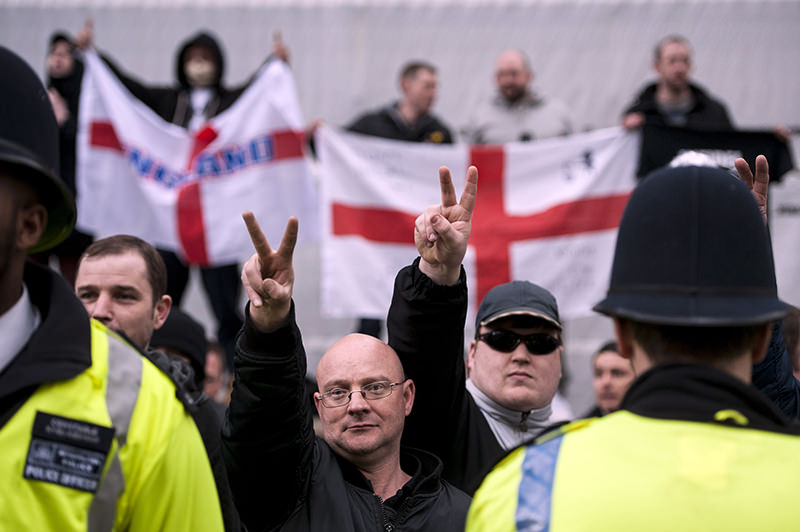 | AFP Photo
by Anadolu Agency Apr 05, 2015 12:00 am
The far-right movement Patriotic Europeans Against the Islamization of the West, also known as PEGIDA, has held its first march in London, U.K. in front of the Prime Minister's residence on Saturday with very little turnout.

The protest was organized by the U.K. branch of the German far-right movement established in 2014. PEGIDA U.K. chose London's famous Downing Street, home for the de facto residence of the Prime Minister and close to Houses of Parliament and Buckingham Palace as the location for Saturday's gathering.

The U.K. branch of PEGIDA had announced the march earlier via its official Facebook account saying, "Are you patriotic? Are you loyal to your country? Have you spare time? Do you live in London? Where are you going to be at 5pm? Watching TV or at PEGIDA UK patriotic rally? What is your excuse? Your country needs you there in London."


On the other hand, about 2,000 people attended an anti-PEGIDA protest, which was held in Newgate Street of Newcastle.

People were holding banners that said "Stop PEGIDA, no to Islamophobia and Racism" and "Newcastle united against racism, fascism and Islamophobia."

Security forces were deployed in the region in order not to have clashes between the two groups of protesters. Police detained five PEGIDA supporters for attempting to cause commotion.

The AFN released a statement via its official website, saying, "London Anti-Fascists oppose all forms of reactionary movements-from the streets to the state. We see PEGIDA UK as one manifestation of the unease in society caused by state divide and rule tactics, the stirring up racial and religious hatred in the media and the decline in living standards."

PEGIDA organized protests in Norway, Denmark, Sweden and the U.K. in January and February 2015, with low turnouts. The group at one point boasted thousands of protesters, but then saw interest fade. Hundreds of people also took part in counter-demonstrations against the protests.