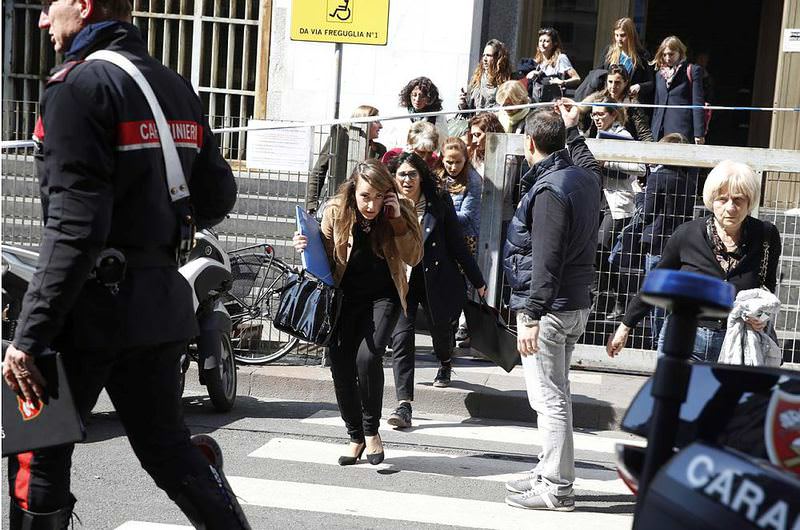 by Apr 09, 2015 12:00 am
Four people died and one person was seriously injured on Thursday, after a gunman opened fire inside Milan's court of justice, in a shocking incident which raised questions about lax security at the site.

Two people who suffered cardiac arrest were declared dead after being hospitalized, and a third body was found inside the justice palace with no apparent wounds, local emergency services said in a statement.

A fourth victim, taken to hospital in a critical condition, died during surgery, according to the ANSA news agency. Emergency services said a second person was hospitalized, but was not in a life-threatening condition.

The presumed murderer was identified as businessman Claudio Giardiello, who was in court as a defendant in a bankruptcy case. He got away after the attack, but police later arrested him in Vimercate, a suburb half an hour's drive away from central Milan.

Milan Appeals Court President Giovanni Canzio named bankruptcy judge Fernando Ciampi as one of the victims. The ANSA news agency said Lorenzo Claris Appiani, who was representing Giardiello in court, was another casualty.

According to several media reports, Ciampi was attacked inside his office, while others were shot at during Giardiello's hearing. Emergency services said there were "several" more people who suffered minor injuries.

A lawyer who represented Giardiello in the past, Valerio Maraniello, told ANSA that he was an "intractable client because he never listened to advice. He was someone who thought that everybody was out to cheat on him, he was paranoid."

Justice Minister Andrea Orlando broke off parliamentary engagements in Rome to travel to Milan. "I never received any reports about security shortcomings" at the Milan tribunal, Orlando said. "We have to see if there were failures," he added.

Interior Minister Angelino Alfano, who was already in Milan for other business, was the first government official to visit the crime scene.

In Italy, visitors to courtrooms have to pass through metal detectors, but accredited lawyers and magistrates are exempted from such controls. There were suggestions that Giardiello was let into the building, unscreened, along with his defence counsel.