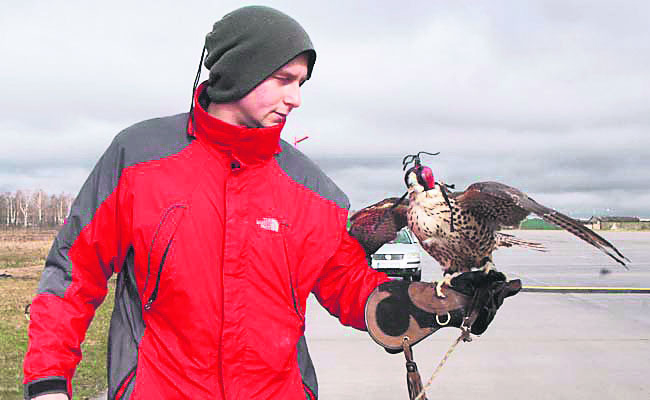 by French Press Agency - AFP
Apr 28, 2015 12:00 am
A NATO mission policing Baltic airspace amid heightened tensions with Russia has forged a rather exotic alliance to ensure the safety of pilots and their jets.

Four birds of prey - three falcons and an eagle - soar over the tarmac near four massive hangars at the Zokniai airforce base in northwest Lithuania. The winged warriors flew in from Poland along with their trainer to keep runways clear of other birds and wildlife, so as to avert potentially disastrous collisions on take-off and landing.

"All artificial methods work only for a short time because birds get used to them, but they're always mindful of predators," Mariusz Chroscinski, a soft-spoken Polish falconer told AFP. The Polish airforce brought the 26-year-old to Zokniai to help out with its four-month rotation in NATO's Baltic air policing mission. NATO has been guarding Baltic skies since 2004, when Estonia, Latvia and Lithuania joined the defence alliance but lacked the air power to monitor their own airspace.

Under Moscow's thumb until 1991, the three small states have been on high alert since Russia annexed the Crimean peninsula from Ukraine last year.

NATO jets have been scrambled dozens of times from Zokniai in recent months to escort Russian fighters and nuclear-capable bombers flying near the Baltic states with their transponders switched off, sparking protests over the danger they posed to civil aviation. In December, a Russian military plane came dangerously close to a passenger plane from Cimber Air, of the SAS group, which had taken off from Copenhagen headed for Poznan in Poland, according to the Swedish military. Chroscinski sends his birds of prey flying above the airbase and walks up and down the runways with a hunting dog to ensure wild birds keep their distance as jets prepare for take-off.

"Even the smallest of birds can be swallowed up by a jet engine and completely destroy an aircraft. These engines are very expensive, not to mention the danger posed to pilots," Polish airforce Captain Janusz Szczypior, who is currently deployed to Zokniai, told AFP.

Jets took off from the airstrip a total of 150 times last year, often scrambled to monitor Russian warplanes.

The winged predators provide maximum safety at minimal cost. One falcon is worth up to 1,000 euros and eats the equivalent of its weight in meat each day. That compares favourably with the cost of jet fuel when fighters can burn up to 15 litres per second. Officials at the Lithuanian base took a shine to their fine-feathered allies and have signed Chroscinski to stay on for the summer when wild birds are particularly active in the area.

"Better an ounce of prevention than a pound of cure," Arnas Glazauskas, coordinator of international forces at Zokniai, told AFP. "The method is proving very efficient, especially with the spike in take-offs and landings we've experienced lately."
Last Update: Apr 28, 2015 11:02 pm