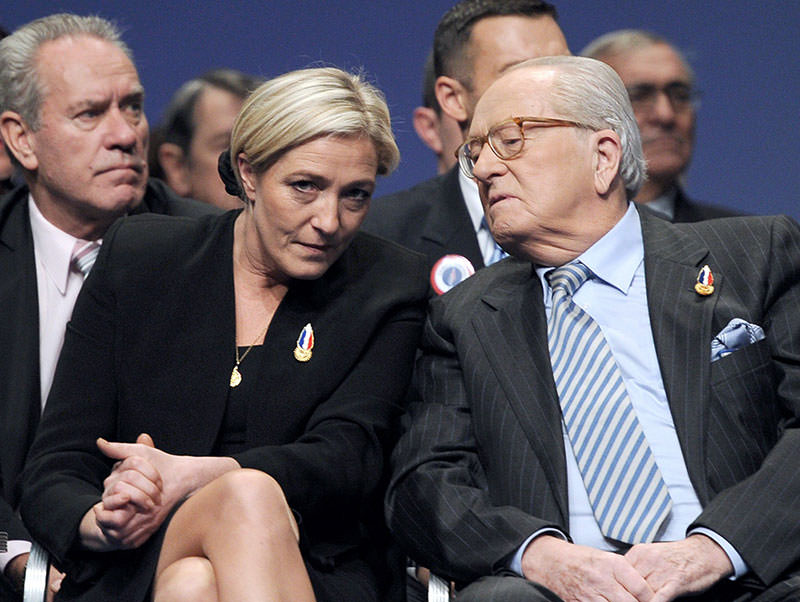 | AFP Photo
by May 05, 2015 12:00 am
National Front founder Jean-Marie Le Pen disowned his daughter and party leader Marine on Tuesday after she suspended him from the far-right French movement, saying he hoped she would lose the 2017 presidential election.

The party's executive committee, chaired by Marine Le Pen, suspended his membership on Monday and said it would strip him of his title of honorary chairman after he repeated his view that Nazi gas chambers were a mere "detail" of World War Two.

Marine Le Pen, who succeeded her father as party chief in 2011, has sought to rid the party of its anti-Semitic image and position it as an anti-immigrant Eurosceptic force to woo voters before the 2017 presidential elections.

The war of words between them escalated after his suspension, with the former paratrooper saying it would be "scandalous" if she were to become head of state.

"I'm ashamed that the president of the National Front has my name," he said in an interview with Europe 1 radio on Tuesday. Late on Monday, he had already suggested his daughter get married so as to change her family name.

Opinion polls indicate she could make it to the second round of the 2017 election but not win. There has been no clear poll evidence so far of an overall impact on her popularity with voters, or of the party as a whole.

Sciences Po university's Pascal Perrineau said he did not expect the suspension and possible expulsion of Le Pen senior would lead to a break-up of the National Front, as in 1998 when his longtime ally Bruno Megret broke off to form his own party.

His granddaughter, Marion Marechal-Le Pen, has also been drawn into the fight.

She told Le Figaro newspaper she had requested more time from the National Front to decide whether to represent them in the southern Provence-Alpes-Cote d'Azur - her grandfather's stronghold - in December regional elections as she did not want to be at the heart of the family conflict.

"A more neutral candidate could perhaps be preferable in the interest of the movement ... I have no wish to be taken hostage by Jean-Marie Le Pen, in particular," she said.