Russia left out of second G7 summit over Ukrainian crisis 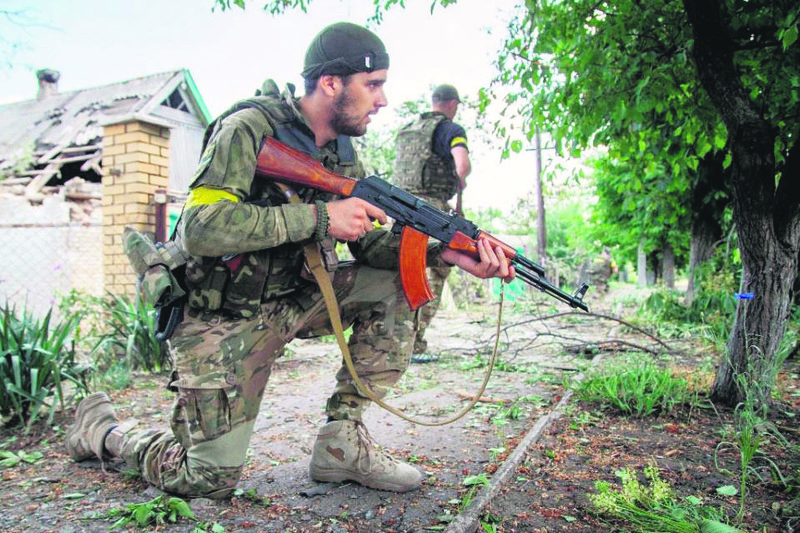 Ukrainian soldiers guard a checkpoint during clashes in the eastern city of Maryinka where clashes intensified recently.
by Daily Sabah with Wires Jun 06, 2015 12:00 am

As leaders of the G7 convene in Germany this weekend, a possible return to the G8 is out of the question, as opposition to Russia being allowed to rejoin World leaders around the G7 table grows

This weekend, leaders of the world's seven richest nations are gathering for an exclusive meeting at the German luxury hotel Schloss Elmau in Bavaria to debate wide ranging topics such as climate change, the myriad crises in the Middle East, Ukraine, the South China Sea and international terrorism as further sanctions on Russia and its possible return to the G8 took priority at the exclusive summit.

Extending EU sanctions on Russia for six months is on the agenda of the summit. "I consider it to be a technical issue. The political will of rolling over sanctions will be discussed. I don't want to speculate about it. The extension should be six months and then we come back and see where we are. But it is not a decision for the G7, the G7 will not compare notes on the duration," a senior EU official told reporters on Friday on condition of anonymity.

EU economic sanctions on Russia, imposed because of the conflict in Ukraine, are due to expire in July. EU leaders agreed in March that the sanctions would stay until the Minsk cease-fire agreement is fully implemented, effectively extending them to the end of the year, but a formal decision is yet to be taken. As the Tier 2 sanctions imposed travel bans and asset freezes on specific Russian businesses, individuals and organizations in President Vladimir Putin's inner circle in response to the annexation of Crimea and the ongoing crisis in eastern Ukraine, European leaders aim to block Russian access to European markets for whole sectors with Tier 3 sanctions, affecting the Russian economy – mainly gas and oil. Some big Russian enterprise owners close to Putin such as Novatek, Gazprombank and many others have been the main targets for both EU and U.S. sanctions. The EU has also hit Russia hard with Tier 3 sanctions, which are hard-hitting sanctions to hit Russian gas and oil and to impose an arms embargo.

U.S. President Barack Obama will rally European support for maintaining support for sanctions that the West imposed on Russia following its annexation of Crimea, and for what the U.S. and its allies say are Russia's ongoing destabilizing actions in eastern Ukraine during the summit. "We believe it's important that Europe is sending a strong signal of the need to continue the strong sanctions that are in place on Russia, and they'll have decisions to make through the month about how they will continue those sanctions," Obama's deputy national security advisor Ben Rhodes said.

Meanwhile, Canadian Prime Minister Stephen Harper expressed his opposition to Russia being allowed to rejoin Western leaders around the G7 table. He said Thursday that Russia should never be allowed back in the G7 as long as Putin is president. "I don't think Russia under Vladimir Putin belongs in the G7. Period," Harper said. "Canada would very, very strongly oppose Putin ever sitting around that table again. It would require consensus to bring Russia back, and that consensus will just not happen." Harper said Russia has ramped up its long-range bomber patrols near North American airspace since the Ukraine conflict started. "This is a country that has shown a willingness to invade its neighbors, to actually seize territory that does not belong to it, and so I don't think we should take this escalation of a hostile military posture lightly. It needs to be treated seriously," Harper said. The G7 group of economic powers, which includes Canada, France, Germany, Italy, Japan, the U.S. and the UK, included Russia in the exclusive gathering in 1998, but suspended Moscow last year after it annexed Crimea from Ukraine.
Last Update: Jun 06, 2015 2:14 am
RELATED TOPICS