US to increase its military presence in ex-Soviet countries 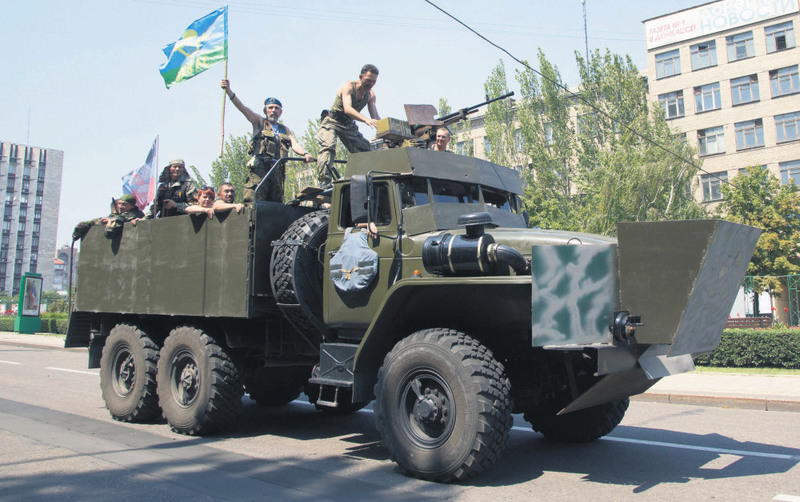 Russian-backed separatists in Ukraine continue clashing with the forces loyal to the Kiev administration.
by Daily Sabah with Reuters Jun 15, 2015 12:00 am

While the clashes between Ukrainian forces and Russian-backed separatist groups continue, the U.S. is planing to store heavy military equipment in ex-Soviet countries to be prepared against a potential Russian threat

With Ukrainian separatists continuing their assaults on strategic areas in eastern Ukraine, the U.S. sends more weapons ex-Soviet countries. In the face of a possible proxy war with Russia over the Ukrainian crisis, the United States sent 290 paratroopers to train Ukrainian forces. The U.S. now plans to store heavy military equipment in the Baltics and Eastern European nations to reassure allies unnerved by Russia's intervention in Ukraine and to deter further aggression, U.S. officials said. The move would be the first time Washington has stationed heavy military equipment in the newer NATO member states that were once in the Soviet sphere of influence or, in the case of the three Baltic republics, part of the Soviet Union. Though no final decision has been taken, the Pentagon is poised to store battle tanks, infantry fighting vehicles and other heavy weapons for as many as 5,000 troops, one U.S. official told Reuters on condition of anonymity. The official said the proposal envisages storing a company's worth of equipment, enough for 150 soldiers, in each of the three Baltic nations: Lithuania, Latvia and Estonia. Enough equipment for a company or possibly a battalion, or about 750 soldiers, would also be located in Poland, Romania, Bulgaria and possibly Hungary. "We will pre-position significant equipment," a second U.S. official said. Both officials were confirming an article Sunday in the New York Times, which first reported on the U.S. plans.

Poland and Lithuania confirmed they were in talks with Washington on stationing heavy arms in warehouses in the region. "The threats to the Baltic region have increased. This has been discussed many times and I view positively (the fact) that talks lead to concrete decisions which, I think, will become a reality," Lithuanian Prime Minister Algirdas Butkevicius told Reuters. Poland's defense minister said he expected a decision soon. "During talks in Washington in May I have been assured that the decision will be taken soon," said a ministry tweet, quoting Defense Minister Tomasz Siemoniak. "This is another step to increase U.S. presence in Poland and the region." The proposal, which seeks to reassure European allies in the wake of Russia's annexation of Ukraine's Crimea in March 2014, is expected to be approved by U.S. Defense Secretary Ash Carter and the White House before a NATO defense ministers' meeting in Brussels this month, the report said, quoting senior officials. Asked about the article, a Pentagon spokesman said no decision had been made about the equipment. "Over the last few years, the United States military has increased the pre-positioning of equipment for training and exercises with our NATO allies and partners," Colonel Steve Warren said. "The U.S. military continues to review the best location to store these materials in consultation with our allies," he said in a statement. "At this time, we have made no decision about if or when to move to this equipment."

As the heavy clashes continue unabated in eastern Ukraine, more than 5,358 people have been reportedly killed and 12,235 injured, according to U.N. figures released in early March. The death toll continues to rise. The shaky Feb. 12 cease-fire agreement is generally holding in violence-stricken eastern Ukraine. However, breaches of the renewed Minsk Accord have been widely reported, demonstrating that the months-long crisis in Ukraine's east has yet to be resolved despite a series of mediating talks and peace efforts. Also, more than two million Ukrainians have been forcibly displaced due to worsening humanitarian conditions in rebel-held areas where heavy fighting has turned eastern Ukraine into a battle zone.
Last Update: Jun 15, 2015 9:59 pm
RELATED TOPICS