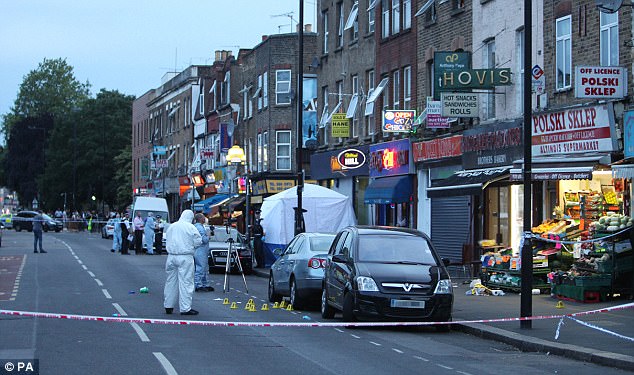 by Daily Sabah Jul 11, 2015 12:00 am
A Turkish man have been killed and a woman critically injured after a double shooting in broad daylight on a busy London street on Friday.

The victim, Erdoğan Güzel, a 42-year-old father-of-two, have been shot dead outside a bakery in Wood Green around 5.45 p.m. local time.
An eyewitness, a local business owner, said that the incident was a drive-by shooting.

Haydar Alma, 42, who owns a Polish shop, told ITV News: "I was in the shop working and I heard the gun, like an automatic. I looked outside and I saw the car and the window open and somebody shooting."

İmam Sümbül, a family friend, said Güzel was simply in the wrong place at the wrong time and the bullet was not meant for him.

"There is a big Turkish community here, everyone uses each other's shops. As you can see, a lot of people here are interested in what happened and want to know what went on here. He was a good guy." Sümbül said.

He added that Güzel has two children, a son and a daughter aged between 15 and 16, who are currently on vacation in Turkey.

London police said Güzel died at the scene at around 7 p.m. despite paramedics' efforts which lasted for over an hour. The woman is in a critical but stable condition at an east London hospital.

No arrests have been made as the investigation over the shootings is still ongoing, the police have said.