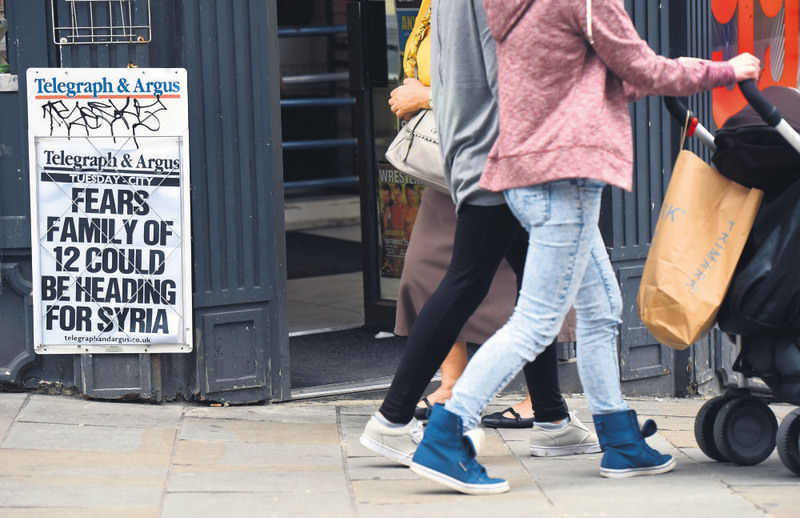 by Daily Sabah with Wires Jul 15, 2015 12:00 am
According to the United Kingdom counter-terrorism chiefs, 43 women are believed to have traveled from the United Kingdom to Syria to join the Islamic State of Iraq and al-Sham (ISIS) in the past year. These estimates released by the Metropolitan Police are the first official figure count of women and young girls that are believed to have joined the militant group.

British police have recently voiced concerns that the upcoming school holidays will be an opportunity for more female students to travel to Syria to join the militants, regularly in the form of labor beyond the battlefield and spouses of militants.

U.K. security officials believe nearly 700 people have gone to Syria to become involved in extremist groups and about half have returned, BBC reported.

These numbers are released after a series of high-profile cases of U.K. citizens traveling to Syria. Most recently notable, is the case of three sisters from Bedfordshire and their extended family, including their nine children, who disappeared after a trip to Saudi Arabia and are believed to be in Syria as of last month.

To combat the militant group's recruitment efforts, police are running a radio campaign targeted toward ethnic minorities whose children they believe are susceptible to recruitment, appealing mostly to mothers who notice unusual behavior in their children to intervene. Aiming at preventing young British girls and women from traveling to the Middle East to join ISIS, the radio campaign urges mothers to pay attentions to signs that indicate their children are planning travels. The campaign also asks parents to talk to their daughters about their feelings and changes in behavior. The adverts will feature on minority ethnic radio stations across the country for two weeks.

In an interview with Aljazeera English, Metropolitan Assistant Commissioner Helen Ball warned young girls considering joining ISIS that "you're being fed terrible lies by people who have manipulated and lured you into traveling to Syria." She added, "You might be being told you'll marry a militant and help him in his work, but actually you'll become the sexual partner of someone you haven't chosen and I'm sure you'll be the victim of abuse."

According to the BBC, Ball also encourages speaking to the police in confidence about their daughters' behavior so that officials can get involved at the "earliest opportunity."

The first group of British schoolgirls known to have left the U.K. for Syria were Aqsa Mahmood, Grace Dare, and Sally Jones, who were supposed to be traveling for a holiday in Turkey. Two of the three girls have since married ISIS militants. The case developed international attention and prompted anti-recruitment efforts in the U.K. and other countries after being caught on camera in February during their travels before they disappeared.

The youngest groups of girls leaving the U.K. for Syria were 15 years old. In March three British teenagers, Shamima Begum, 15, Amira Abase, 15, and Kadiza Sultana, 16, suspected of trying to join ISIS, were detained in Istanbul and quickly deported to the U.K., where they were arrested. Following the incident, cooperation between the Turkish police and British police intensified to do more to prevent other citizens traveling to join extremists in places such as Syria and Iraq.
Last Update: Jul 15, 2015 10:18 pm
RELATED TOPICS