Tsipras axes 'rebel ministers', shows he is 'in control' 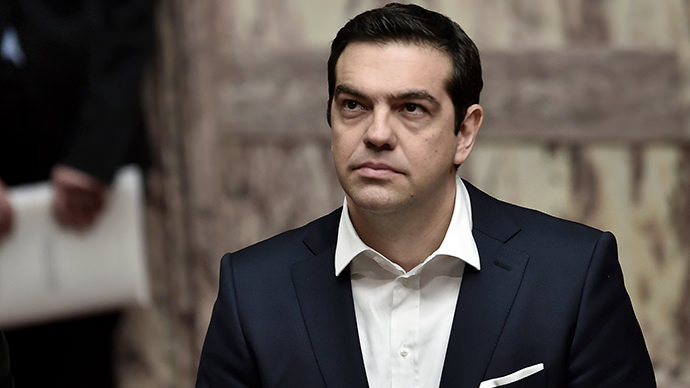 by Daily Sabah with Wires Jul 17, 2015 12:00 am
Greek Prime Minister Alexis Tsipras has axed some of the 'rebel ministers' from his cabinet on Friday, two days after almost a quarter of his lawmakers voted against the austerity bill he had put forward in order to fulfill the international creditors' requirements on a third bailout.
The most prominent victim was energy minister Panagiotis Lafazanis, the head of a hardline faction within Tsipras's party that has demanded the country leave the eurozone. His ally, the deputy minister of defence, was also axed.

Euclid Tsakalotos, who became finance minister on July 6 in replacement of Yanis Varoufakis, kept his portfolio.

The reshuffle came just hours after the EU approved a short-term 7.16-billion-euro ($7.8 billion) loan to Greece, allowing it to make huge payments as early as next week to its creditors while a new eurozone debt bailout is being hammered out.

It also followed a crucial green light from German lawmakers for Chancellor Angela Merkel to begin negotiations on a new 86-billion-euro bailout package.

The loan, to be given through the EFSM rescue fund, will allow Greece to make a critical payment of 4.2 billion euros due Monday to the European Central Bank needed to keep the country in the euro.

The Greek prime minister fuelled hopes of a fresh boost to the negotiations after stamping down on a lawmaker mutiny in his radical left Syriza party which had weakened the government and raised fears of early elections.

The reshuffle, which saw nine changes overall, replaced the junior ministers of finance and foreign affairs, who had resigned over the bailout deal. The new members of the cabinet were set to be sworn in at a ceremony on Saturday.

Merkel, who like Tsipras, faced rebels in her own party ranks, told German lawmakers that the deal with Athens was the last chance to prevent "chaos" in the crisis-hit country.

In the end she won broad approval from the Bundestag, where her "grand coalition" commands an overwhelming majority, with 439 voting in favour, 119 against and 40 abstentions.

Addressing the chamber before the vote, Merkel had argued that "we would be grossly negligent, indeed acting irresponsibly, if we did not at least try this path".

It was Merkel -- leader of the EU's biggest economy and effective bailout paymaster -- who spearheaded last weekend's marathon Brussels talks that brought Greece back from the brink of crashing out of the euro.

She said the alternative would have meant "watching on as the country virtually bleeds out, people no longer getting their money, where chaos and violence could be the result".

Equally, "bending the rules until they're worthless" was not an option, she said, arguing that for Europe this "would mean the end of a community bound by legal rules, and we wouldn't agree to that".

That was why, she said, "we are making a last try in tough, tenacious discussions" to seal a third aid package, "despite all the setbacks of the past six months and despite all legitimate scepticism".

The German 'Yes' vote came a day after European Central Bank chief Mario Draghi boosted a vital cash lifeline to Greece's struggling banks with 900 million euros that will allow them to open their doors for the first time in almost three weeks on Monday.
To prevent a catastrophic "Grexit", the parliament in Athens early Thursday adopted reforms on pensions, taxes, labour laws and state asset sales that were harsher than those Greeks had rejected in a July 5 referendum.

The about-face sparked violent street protests and speculation of early elections in Greece, where the hard-left Syriza party came to power in January polls on a mandate to reject austerity.
Merkel has been harshly criticised for forcing more austerity on Greece, using the threat of a five-year euro "time-out" that had been floated by Finance Minister Wolfgang Schaeuble.

But dissenters at home complain Merkel has been too soft, leaving German taxpayers to lend out billions they are unlikely to ever see again.

The mass-circulation Bild daily, which has long campaigned for a Grexit, demanded "politicians must show their true colours" -- and 65 of Merkel's party members indeed voted 'No' or abstained.

Germany is one of several EU countries whose parliaments must sign off of any debt deal for Greece, as the legislature in Austria also did Friday.

The public mood in Germany was mixed between pro-European sentiment and anger with the Greek government. A new Forsa poll found 53 percent of respondents backed new talks, while 42 percent were against.

Schaeuble -- who says he personally thinks a Grexit would be best for the country -- nonetheless vowed: "We will do everything in our power to make this last attempt a success."

He reiterated however opposition to debt relief for Greece -- something IMF chief Christine Lagarde on Friday again stressed would be necessary.

Lagarde, asked whether the bailout plan could work without reducing the crushing debt burden of 320 billion euros, said "The answer is fairly categoric: 'No.'"

German Left party leader Gregor Gysi recalled that post-World War II Germany benefited from a write-off of half its debt and said in parliament: "Mr Schaeuble, I am sorry, but you are in the process of destroying the European idea."