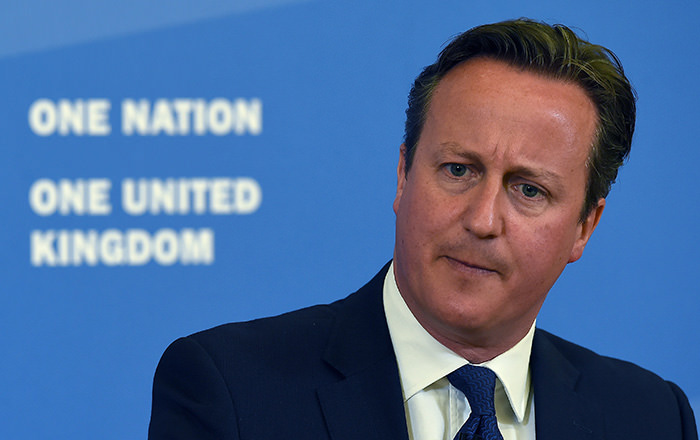 British Prime Minister David Cameron pauses as he delivers a speech at Ninestiles Academy in Birmingham, central England, on July 20, 2015 (AFP Photo)
by Anadolu Agency Jul 21, 2015 12:00 am
The five-year counter-extremism plan unveiled by Britain has drawn strong reactions from Muslim groups and non-governmental organizations in the country.

As part of the plan to be submitted to the parliament in the fall, the British government aims to prevent its citizens from leaving the country to join radical groups and confront home-grown extremism.

"These people aren't just extremists, they are also despicable far-right groups too, and what links them all is their aim to groom young people and brainwash their minds," said Prime Minister David Cameron during a speech on Monday at a school in Birmingham.

However, several Muslim groups and NGOs in the country believe that Cameron's message and its plan could further isolate the British Muslim population.

Omar al-Hamdun, head of the Muslim Association of Britain (MAB), said Cameron's speech could be detrimental to Muslims in the U.K.

"For example, Cameron is right in his views on the need to counter-extremism but we think this strategy will cause more harm to British Muslims than good," he said.

Al-Hamdun stated that he did not agree with Cameron's remarks, in which he said "lots of Muslims do not identify themselves as Britons".

"The British government encouraged Muslims to be governors. But when Muslims became governors and participated in politics, they tried to push Muslims away from the Trojan horse and accuse them of imposing their own political ideologies and Islam," he added.

Hamdun also criticized Cameron's aim to "further spread British values" -- which designates universal values such as rule of law, freedom of expression, and democracy -- as part of the newly unveiled plan, which he said itself contradicts to said "British values".

Raza Nadim -- spokesman of the human rights group Muslim Public Affairs Committee (MPAC), which purports to lobby for an increased Muslim presence and representation in British politics -- told Anadolu Agency that the anti-extremism strategy was incorrect and would cause further problems.

"I don't think this policy is sincere and many Muslims listening to it think they are seen as a problem by the government," he said.

The British government's anti-extremism plan will also bring in some legislative proposals, which include the closure of certain religious venues and the ban of speeches by certain Muslim religious figures at universities and schools.

The head of the organization, which has reaped its share of controversy over the years -- it was for instance banned from university campuses in 2004, The Guardian reported, after the National Union of Students called it "anti-Semitic", a charge that MPAC refutes -- highlighted that the plan will cause nothing but further problems as Muslims will think they do not have the right to freely express their opinions in the British community.

Cameron vowed to use his country's liberal values to challenge the "bigotry, oppression and theocracy" of such groups but said the authorities would be tougher in enforcing them.

"We have lacked the confidence to enforce our values," he said, adding there will be "no more turning a blind eye on the basis of cultural sensitivities".

"Our values are so great that we should want to enforce them for all, including new arrivals, including people subjected potentially to those practices," he added

The government would take steps to prevent religious and ethnic segregation in Britain's schools and on housing estates, Cameron added.

Mohammed Shafiq, head of the Ramadhan Foundation, also reacted to Cameron's speech in British daily The Guardian on Tuesday.

"The prime minister's speech has made it all about Muslims, yet he has not engaged them about his counter-terrorism strategy: if Muslims are central to defeating the poisonous narrative then why not engage the community?" he wrote.

The prime minister distanced himself from reports of expanded U.K. military involvement in Iraq or Syria, insisting any "boots on the ground" needed to be from those countries. However, he did not rule out further British air support against the self-proclaimed Islamic State in Iraq and al-Sham (ISIS).

Lawmakers voted against military action in Syria two years ago, blocking a government proposal to join U.S.-led airstrikes against Daesh in Syria, although MPs did approve strikes against the group in Iraq.

More than 700 Britons have traveled to Syria and Iraq to join extremist groups and hundreds have returned to the U.K., according to counter-terrorism police.

There are around 3 million Muslims in the U.K. which represents nearly 5 percent of the country's total population.
Last Update: Jul 21, 2015 7:37 pm
RELATED TOPICS