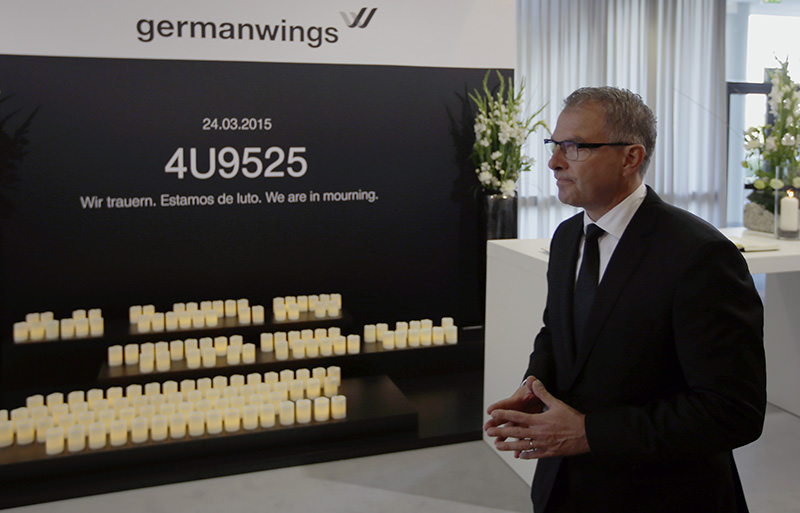 Lufthansa CEO Carsten Spohr walks by a memorial place after he signed a condolence book for the victims of the Germanwings plane crash in FrancE (AP Photo)
by Jul 21, 2015 12:00 am
The families of 18 schoolchildren and teachers killed in the Germanwings crash have called for an apology from the head of Lufthansa, saying their children might still be alive if the airline's doctors had paid more attention to the pilot's health.

The children and their teachers were returning to Germany from an exchange trip in Spain when the Barcelona-Duesseldorf flight was deliberately brought down by the co-pilot, Andreas Lubitz, on March 24.

In an emotional letter to the chief executive of Lufthansa, Germanwings' parent group, the families said CEO Carsten Spohr had not spoken with them personally, nor had he apologized for the crash, in which all 150 on board died.

"You were there for your customers, but not for us," the families wrote in the letter made public by their lawyer.

They said they wanted an apology for Lufthansa's doctors not paying close attention to Lubitz's prior period of depression and for Lufthansa not having the two-person cockpit rule before the crash.

"With more attention paid to these risks our children would perhaps still be alive," they said.

More pilot screening and keeping two people in the cockpit at all times were among recommendations issued last week by a European task force set up after the crash.

A Lufthansa spokesman said Spohr had spoken to many family members and had fully accepted responsibility and apologized for the suffering of the families. Signed letters of condolence had also been sent out, he said.

The publication of the letter comes after the families' lawyers, Elmar Giemulla, rejected an offer of 25,000 euros ($27,000) for the pain and suffering of the victims, saying a six-figure sum would be more appropriate.

Unlike in the United States, German law does not provide for large payouts for emotional damages.

Ronald Schmid, a German professor of aviation law, told Reuters the German laws on emotional damages were among the worst in western Europe. "The system is out of date and needs changing," he said.

Germanwings said the payout for pain and suffering made up only a small part of the claims and that material damages, such as lost earnings, could result in high sums being paid.

A spokesman for the airline said it was awaiting the calculation of such claims from lawyers.

Lufthansa has already paid 50,000 euros in immediate financial assistance, and relatives can also each claim 10,000 euros for their own suffering, on top of the 25,000 euros emotional damages offered to the victims.