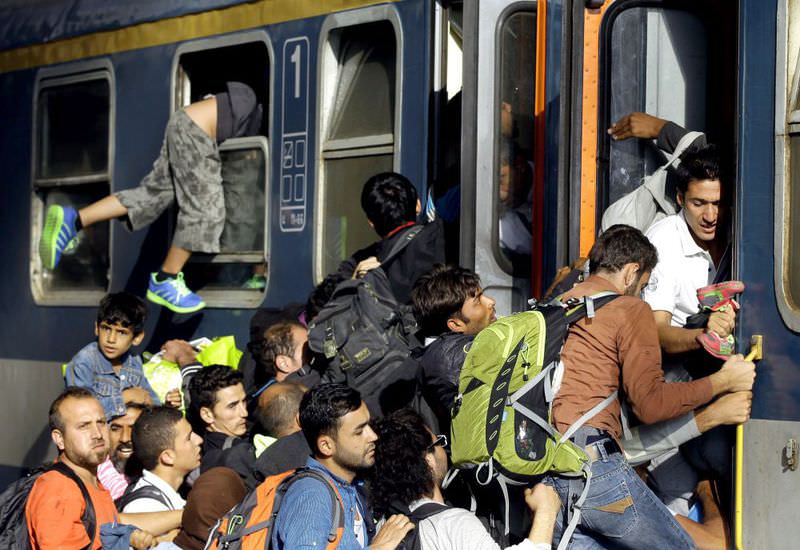 Migrants board a local train heading to the Hungarian-Austrian border at the main train station in Budapest.
by Daily Sabah with Agencies Sep 04, 2015 12:00 am

After a two-day standoff at a Budapest train station, hundreds of migrants stormed a waiting train to reach Western Europe, but another announcement that all direct trains to western destinations were suspended created chaos and confusion at the station

Hundreds of people, many of them refugees from conflicts in the Middle East, stormed a waiting train, cramming children through open windows in the belief that a two-day standoff with police had ended and they were being allowed to continue their journey west to Austria, Germany and beyond.

Trains heading for Budapest from Slovakia and the Czech Republic will be stopped at the Hungarian border town of Szob, Czech and Slovak passenger railway operators said on Thursday, as migrants from Syria flood toward the Hungarian capital. But signs in Hungarian said there were no west-bound trains. It was unclear why the police had suddenly withdrawn, having prevented over 2,000 migrants from entering for two days.

In Hungary, a key arrival point for tens of thousands of migrants entering the European Union, with some 50,000 entering the country in August alone, Budapest's Keleti station has become a symbol of the crisis. Nearly all those who have entered Hungary press on west to the richer countries of northern and western Europe, in many cases to Germany. Several thousand were allowed to board trains bound for Austria and Germany on Monday, but the following day the station was closed to anyone without an EU passport or a valid visa. The move left around 2,000 men, women and children stranded around the station or in a makeshift refugee camp beneath the station and scuffles broke out between police and migrants on Tuesday.

Meanwhile, Czech police on Tuesday marked arms of the migrants with numbers after they detained more than 200 people, mostly Syrians, in Breclav who arrived on trains from Hungary and Austria in Germany-bound trains, a practice reminiscent of the Holocaust. After it sparked criticism on social media, spokeswoman Katerina Rendlova defended the practice, saying it was used in a chaotic situation to prevent children from being separated from mothers. Rendlova said police initially gave them the numbers on a piece of paper but the migrants threw them away. Rendlova said yesterday police will use wristbands instead.

EU President Donald Tusk said the EU is divided as the east and west over the migrant crisis. "There is a divide... between the east and the west of the EU," Tusk said ahead of the meeting with Hungarian Prime Minister Viktor Orban. "Some member states are thinking about containing the wave of migration, symbolized by the Hungarian [border] fence. Others want solidarity in advocating a so-called obligatory basis for (refugee) quotas" to re-distribute refugees.

The EU is riven by frictions between transit nations where the migrants arrive by sea or land -- mainly Greece, Italy and Hungary - and those where they hope to seek asylum, mainly in Northern and Western Europe. France, Italy and Germany urged a rethinking of European asylum rules to ensure "a fair distribution" of migrants throughout the 28-member bloc, as tensions soared between European states over how to tackle the huge influx.

In Britain, where Prime Minister David Cameron's government has accepted just 216 Syrian refugees and a lower number of asylum-seekers in proportion to its population than most EU countries, tens of thousands of people signed petitions demanding change.

Pressure for change was increased by the images of a tiny child lying face down in the surf at one of Turkey's main tourist resorts, putting a human face to the dangers faced by tens of thousands of desperate people who risk life and limb to get to Europe. Wearing a red T-shirt and blue shorts, the child - identified as 3-year-old Aylan Kurdi - is believed to be one of at least 12 Syrians who died when their boats sank trying to reach Greece.

Peter Bouckaert, Human Rights Watch's director of emergencies, said the Syrian boy and others who drowned with him were "the latest victims of Europe's paltry response in the face of a growing crisis."

The U.N. Security Council said late Wednesday it was discussing a draft resolution to address the crisis that diplomats said may allow an EU naval force to seize ships operated by migrant smugglers in international waters. More than 350,000 people have made the perilous journey from North Africa to Europe this year, many trafficked by people smugglers from war-torn Libya, where nearly 3,000 migrants were rescued Wednesday close to the coast. EU leaders cannot agree on how to redistribute refugees around the bloc, with rules that migrants must apply for asylum in the first country that they land in adding to the disagreements. EU ministers will hold a special meeting in Brussels on September 14 on the crisis.

The turmoil in the Middle East and the five-year war in Syria have led many people to flee the conflict in an attempt to seek security and shelter in a more prosperous and peaceful country, such as in Europe. The European Union's border control agency Frontex said that it had detected some 107,500 people arriving outside regular channels in July, a sharp increase on the previous record set in June of over 70,000, and more than three times as many as it registered in the same month last year.
RELATED TOPICS