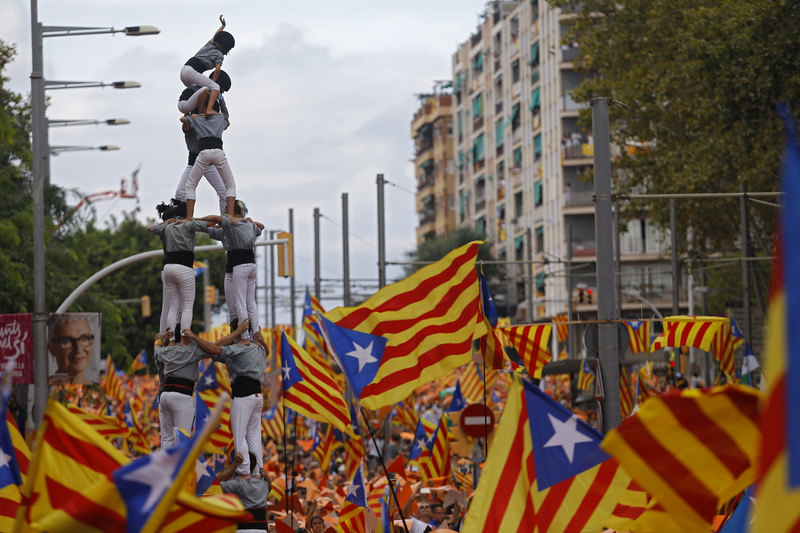 Advocates of independence for Spain's northeastern region of Catalonia on Friday launched their campaign to try to elect a majority of secessionists in regional parliamentary elections on Sept. 27. (AP Photo)
by Associated Press Sep 11, 2015 12:00 am
Hundreds of thousands of separatist-minded Catalans swarmed Barcelona on Friday, giving enthusiastic backing to independence advocates who are hoping to elect a majority of secessionists in the regional parliamentary election this month.

The campaign for the Sept. 27 ballot began on the same day as the Catalan National Day holiday, which separatists have used for years to rally hundreds of thousands to call for the creation of a new European nation.

The top candidate on a list representing a block of pro-independence parties told reporters that separatists wanted to stage an independence referendum so Catalonia's voters could directly express their sentiment.

But since the central government in Madrid refused, "the only way we can know what the people want is to use the elections on the 27th," said the candidate, Raul Romeva.

Pro-independence parties need 68 seats in the 135-member parliament to push forward their agenda. Polls show them on track to win a slim majority.

Independence backers say a win would give the lawmakers a mandate to start drafting a Catalan constitution and attempt secession negotiations with the central government.

A unilateral declaration of independence for the highly industrialized northeastern region, which has a population of 7.5 million and about 18 percent of Spain's economic output, could be made by the parliament by 2017, separatists say.

"I am willing to go to the end of this process if we have the majority of seats in parliament," said Artur Mas, Catalonia's regional leader. But Mas said independence aspirations must be put on hold if backers fail to win a majority in the regional parliament.

The central government in Madrid has consistently insisted that independence for the region is unconstitutional. Spanish officials have also said they won't let citizens who live in Catalonia be stripped of their Spanish citizenship.

Deputy Prime Minister Soraya Saenz de Santamaria told reporters Friday that a regional parliamentary majority for separatists won't help them pull the region away, because Spain's autonomous regions don't have the legal power to do so.

Polls have shown Catalans overwhelmingly support the right for a secession referendum but are evenly divided over whether they actually want the region to be independent. Polls show they are against it if it means a Catalan state would be outside the 28-nation European Union.

Protester Noelia Godoy, 25, a transportation company worker, said she would vote for a pro-independence party because she believes Catalonia doesn't get back what it pays in taxes.

"(We) have our own language, a culture, customs. We share many things (with Spain), but there are other very different things. We feel like a nation and that's why we want to be independent," Godoy said.

Carme Sanchez, a 54-year-old warehouse worker, arrived in Barcelona with a pro-independence flag from the town of Torello.

She used to be against independence but changed her mind after the central government would not allow Catalans to hold a secession referendum like the one last year in Scotland, when Scottish voters rejected breaking away from the United Kingdom

"I thought that all of us, Spain and Catalonia, could live freely together," she said. "But ... the party that now governs us has made me turn pro-independence because even though the Catalan people want to vote on independence, they are always saying no."

Catalans who favor maintaining centuries-old ties with the rest of Spain have yet to hold any significant pro-union rallies. Some complain that the Catalan National Day has morphed from a patriotic celebration like July 4th in the United States into an annual political rally for separatists.

Isabel Coixet, a film director from Barcelona, wrote in Spain's leading El Pais newspaper Friday that she counted herself among Catalans who don't want independence and are secure in their double identity of being both Catalan and Spanish.

"We are those Catalans who are extremely bored by independence and everything it means," said Coixet. "The idea of Spain doesn't repulse us, but it doesn't enthrall us either."