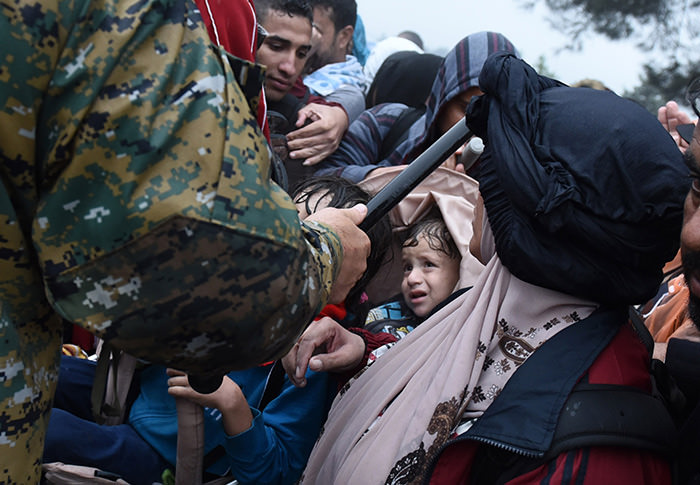 A Macedonian border policeman ask refugees and migrants to stay back as they wait to pass from the northern Greek village of Idomeni to southern Macedonia (AP Photo)
by Mehmet Çelik Sep 11, 2015 12:00 am

As the European countries wrangle over the influx of Syrian refugees, videos that have recently emerged in social media channels have exposed the inhumane treatment of the refugees in the receiving countries.

A recent video showing at least 7,000 refugees at the Macedonian border shows border police attacking refugee men, women, and children using force and beating them with batons in a sea of mud during torrential rain.

A separate footage was also exposed on Friday of the inhumane way the refugees are being treated inside Hungary's main refugee camp on the border with Serbia, with images showing families fed "like animals in a pen" as a volunteer present at the scene described.

The video, shot secretly by an Austrian volunteer who visited the flashpoint Roszke camp on Wednesday, shows some 150 people wildly scrambling for bags of sandwiches thrown at them by Hungarian police wearing helmets and hygiene masks in a fenced-in enclosure inside a big hall.

Women and children were caught in the chaotic scrum as hungry people frantically tried to catch the bread flying through the air.
"It was like animals being fed in a pen, like Guantanamo in Europe," said Klaus Kufner, a volunteer who was with the woman who recorded the images, referring to the notorious prison camp where the United States is accused of torturing inmates, AFP reported.

Another video last week showed a video footage, showing camerawoman working for a private television channel in Hungary kicking and tripping up refugees fleeing police, including a man carrying a child. The camerawoman was later fired from her job.
In separate videos, the woman, who was not named by the channel, is seen kicking a girl and tripping up the man carrying a child as hundreds of refugees, many of them Syrian, broke away from police on Hungary's southern border with Serbia.

Hungary's right-wing government has taken a hard line on the flow of refugees across its borders en route to western Europe, portraying them as a threat to European prosperity and "Christian values".

Over 150,000 refugees, many of them refugees from conflicts in the Middle East, have been recorded entering Hungary so far this year. Police have been trying to round them up and register them in line with European Union rules, but many refugees refuse, fearing that they will then be forced to stay in Hungary.
Last Update: Sep 11, 2015 1:05 pm
RELATED TOPICS