Muslim and Christian Hungarians unite to deliver aid to Syrians 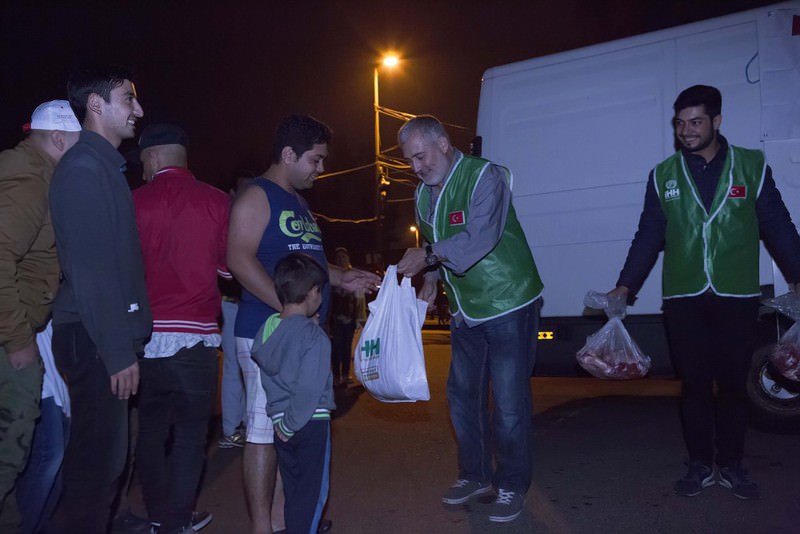 The Hungarian Islamic Society, in cooperation with Turkey's IHH, delivers aid to refugees who arrive in Hungary.
by Yusuf Selman İnanç Oct 01, 2015 12:00 am

The Daily Sabah team witnessed how Hungarians, in cooperation with several aid organizations from different countries including Turkey, fulfill the basic needs of Syrian refugees

Since the deadly war in Syria displaced millions of people, the world has witnessed the worst refugee crisis since World War II. While Syria's neighboring countries, including Turkey, Lebanon, Iraq and Jordan, have accommodated millions of Syrians, hundreds of thousands of others have flown, rode, journeyed by sea and walked en route to prosperous European Union countries. Hungary, which has been tackling serious economic problems including high unemployment rates, has suddenly become one of the most mentioned countries in the international arena as it is in-between the Balkans and wealthy European states. The harsh response by the Hungarian government at the beginning of the crisis when thousands of Syrians flocked to the country and occupied Budapest's streets has drawn criticism from several countries and rights groups. Statements by the government such as the Budapest administration not wanting refugees and claiming the crisis may threaten the Christian roots of Europe have had a negative impact. Moreover, police abuse and the tripping of a refugee along with his daughter by a camerawoman worsened the already-tense atmosphere.

The Daily Sabah team traveled to Hungary to see what was happening on the ground. Our team visited the Croatian and Austrian border where refugees were still arriving by foot. Oddly enough, the refugees take the train from Croatia and the Croatian police let them off near the Hungarian border and ask them to walk. As they reach Hungary, the Hungarian police put them on trains and then leave them near the Austrian border, asking them to walk. When they get to Austria, the registration process begins. The reason behind that odd practice is that no country wants to take the responsibility of "giving a lift" to these people.

Daily Sabah saw that the borders were relatively calm and refugees had emptied out of the cities. A few hundred of them were in camps and waiting to be re-located, while 200 were in prison for attempting to cross the border illegally. However, activists said the government gave up putting people in prison and started facilitating their transit instead, as the refugees are not intending to stay in Hungary but go to wealthier countries.

When our team arrived in Zakany, a small town near the Croatian border, members of the Hungarian Islamic Community and some other groups were readying aid materials like water, food, blankets and clothes. There many were boxes, each of which was for one refugee. They had 20 minutes to deliver the aid as the refugees were boarding the trains and leaving immediately. When refugees arrived by foot, the soldiers and police escorted them until they reached the trains. In the meantime, the aid workers were quickly distributing the materials. The tiredness and happiness could both be seen on the faces of the refugees.

Zoltan Bolek, head of the Hungarian Islamic Community, told Daily Sabah, "We are happy to be here and help our brothers. This is our duty." The community, along with its partners, has delivered aid to tens of thousands of refugees. When asked how they were collecting the goods to deliver, he said: "Thank God there are good people on earth. We are receiving the materials from every part of Europe, from the U.K., Germany, Denmark, Sweden and Austria. But we have to thank Turkey, as it is home to more than 2 million Syrians and they are still sending aid here. We have many partners across Europe. One of them is the Humanitarian Aid Foundation (İHH). With the money they collect from the Turkish people, they send many materials to us."

Bolek also stressed that they work with non-Muslim partners. "We have no problem with Christians. They are sending so many things. This is a humanitarian catastrophe. We are working together." After underscoring that the community has engaged in aid activities before, he said: "Normally, we also help poor Hungarians. They are Christians but when it comes to humanitarian issues, the religion is not important."

When asked about the relations with the government he said: "They are not facilitating our activities but not posing any problems as well." He criticized the government, however. "Hungary needs skilled people to better its economy. The refugee influx was a chance for this country but it missed it. Germany will take all the educated and skilled Syrians."

While waiting for Zoltan to go to their depot where they store donated aid, we saw young people delivering aid. When asked who they were working for, they said were not members of any organization. They are from several parts of Europe, including the U.K., Germany and Sweden, who found each other on Facebook and Twitter, and organized together in order to collect materials and deliver them. While talking to them, our team met Tibor Köcse, a Hungarian man in his 50s who is the mayor of Nagupali, a town near the border. Köcse said he was there to help the refugees as well. When asked about the negative stance taken toward the refugees, he said this is how the media portrays them in order to polarize Hungarians. "They have been displaced from their homeland. Nobody would leave his or her homeland unless there is a deadly war. They must really be unsafe there," he said.

We left the border and went to the warehouse. It was full of aid like clothes, blankets, tents and food, and Zoltan and his team started boxing the materials. He said the Croatian mufti asked them to send blankets and clothes, as the weather is cold at night. He said they were working in cooperation with the mufti and was helping the refugees even before they came.

On the second day, our team was near the Austrian border in Hegyeshalom. The Syrians were really close to their tiring journey that lasted weeks. The activists, most of whom were Hungarians, were present to deliver the aid, since the refugees will spend days in the camps waiting to be relocated. The materials were delivered in cooperation with humanitarian organizations, and all of the refugees were thanking the people. One of them, Mohammad – a Syrian in his 20s from Aleppo – said, "We are happy to see these good people," while a woman with her two sons said: "We are sorry to distract you. But I swear we would not leave our lands if it were habitable."

It is true that the Hungarian government along with opposition groups have been reluctant to participate in the relocation of the refugees and have even taken a negative stance – a stance that has also affected the Hungarian people. But the Hungarians seem to understand that the refugees do not aim to establish a life in Hungary. Instead, they left their lands to survive, not to seek a better life.
RELATED TOPICS