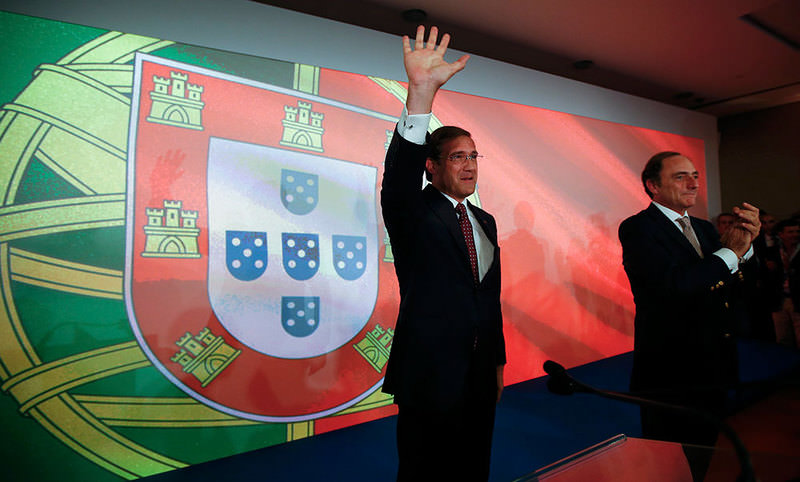 by French Press Agency - AFP
Oct 05, 2015 12:00 am
Portugal's ruling center-right coalition won a general election Sunday seen as a referendum on its austerity policies, but near-complete results indicated it has lost its absolute majority in parliament.

Prime Minister Pedro Passos Coelho's "Portugal Ahead" coalition took 38.6 percent of the vote, according to the partial results, against 32.4 percent the opposition Socialists of former Lisbon mayor Antonio Costa.

Costa, who campaigned on a promise of easing some of the painful reforms imposed on western Europe's poorest country, was quick to concede defeat but ruled out stepping down as party leader.

"The Socialist Party did not achieve its stated objectives, and I take full political and personal responsibility," Costa told supporters in the capital.
But he added: "I will not be resigning."

Sunday's victory by the center-right, after four years of swinging austerity that sent unemployment and emigration soaring, marks a rare case of a bailed-out country re-electing its government.

But the coalition between the premier's Social Democrats and the conservative Popular Party looks set to fall short of the 116 seats needed to control the 230-seat chamber, leaving them outnumbered by the Socialists and MPs from smaller leftist parties.

The Left Bloc, the sister party of Greece's anti-austerity Syriza, looked on course for its best-ever result of 10.2 percent of the vote and 19 seats, up from its previous score of eight.

Passos Coelho campaigned on his record of having returned the country to fragile growth following one of the worst crises in its history and had warned that the Socialists could undo the progress.

After Costa accepted his loss, a jubilant Passos Coelho told his own supporters in Lisbon that he was ready to get to work.

"We will inform the president of the republic that we are ready to form a government," Passos Coelho said, adding that the make-up of the new parliament would "demand greater efforts from all of us".

His triumph at the polling booth could signal a turning of the tide in Europe, after voters in debt-laden Greece last month gave Prime Minister Alexis Tsipras of the hard-left Syriza party a second mandate after he forced through a tough austerity package.

In the coming months, the austerity governments of eurozone Spain and Ireland will face their own election tests.

Passos Coelho's coalition, in power since 2011, had trailed Costa's Socialists in the polls until July, but it won the propaganda battle in the end, analysts said.

"The right has succeeded in getting across the message that returning the Socialists would lead the country to bankruptcy," political scientist Antonio Costa Pinto told AFP.

Another big winner on Sunday was voter apathy, with provisional figures suggesting a record 44.42 percent of abstentions among the more than 9.6 million people eligible to vote.

Passos Coelho, a 51-year-old economist, campaigned on his record of having navigated Portugal safely through the debt crisis and to a return to growth last year after three years of recession.

When he came to power, Portugal was on the verge of defaulting on its debt mountain.

His Socialist predecessor, Jose Socrates, had just asked for a 78 billion euro ($88 billion) bailout from the European Union and the International Monetary Fund.

Portugal exited the bailout scheme in May 2014, but only after harsh austerity measures and the biggest tax hikes in living memory.

The jobless rate has since fallen to 12 percent from a peak of 17.5 percent at the beginning of 2013.

But the recovery has yet to be felt on the streets. One in five Portuguese continue to live below the poverty line with an annual income of less than 5,000 euros ($5,600).

Unlike Spain or Greece, Portugal has not seen the rise of a protest movement strong enough to challenge traditional parties.

"The attempt by Greece's Syriza party to put an end to austerity has failed. Suddenly Portuguese voters see that there really is no alternative" to austerity, political analyst Jose Antonio Passos Palmeira told AFP.