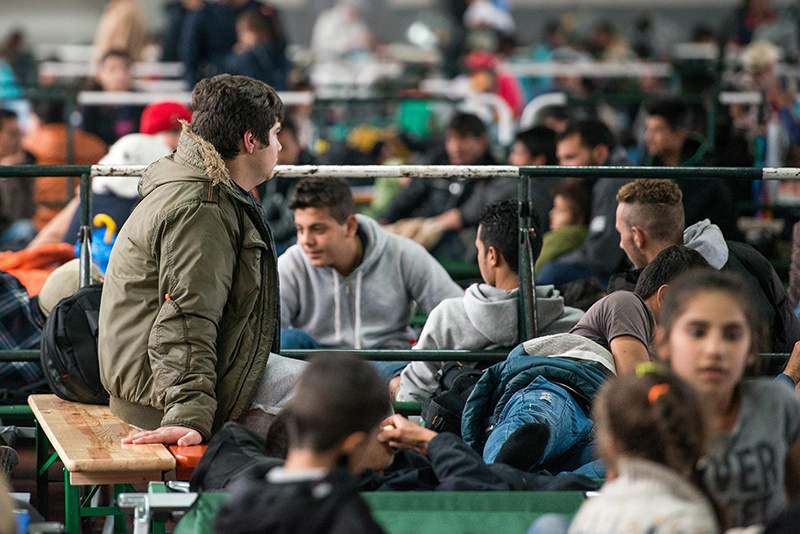 Refugees wait at a registration facility for asylum seekers of the German Federal Police (EPA Photo)
by reuters
Oct 09, 2015 12:00 am
The state of Bavaria threatened on Friday to take the German government to court if it fails to take immediate steps to limit the flow of asylum seekers to Germany.

At a news conference in Munich following a meeting of the Bavarian cabinet, state officials continued their war of words with Berlin, threatening to take matters into their own hands if the flow of refugees did not stop.

Over 200,000 migrants are estimated to have entered Germany since the beginning of September, the vast majority over the Austrian border into Bavaria.

Bavarian Interior Minister Joachim Herrmann spoke of a "massive, uncontrolled influx" that he said had pushed the state to the brink.

"We agreed that if the federal government does not take effective steps soon to limit the continued flow of asylum seekers ... Bavaria reserves the right to file a complaint with the Constitutional Court," Herrmann said.

His boss, Bavarian premier Horst Seehofer, did not follow through on a threat to introduce "defensive measures", such as turning asylum seekers away at the border with Austria.

But he and Herrmann said such a step would have to be considered if Europe's so-called Dublin rules, which state that migrants must seek asylum in the first EU country they arrive in, were not respected.

Although in the same conservative parliamentary bloc, Seehofer, head of the Christian Social Union (CSU), is at loggerheads with Chancellor Angela Merkel over her handling of the refugee crisis.

Merkel has made clear that she will not introduce a refugee cap, telling ARD television in an interview on Wednesday that this would not work.

"The problem is, you can't shut the borders," Merkel said. "Then we'd need a 3,000 kilometre fence and we've seen in Hungary what happens when you build a fence. People find other ways."