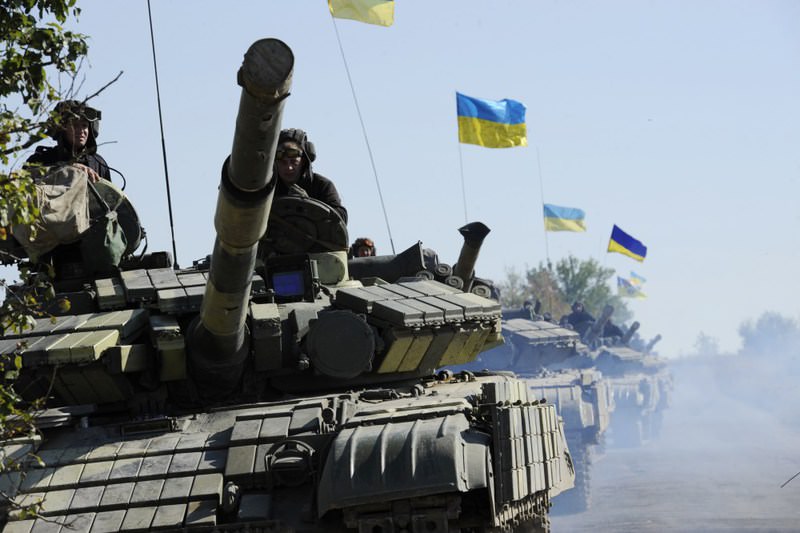 by Daily Sabah with Wires
Oct 09, 2015 12:00 am
Ukrainian President Petro Poroshenko said on Wednesday a "real truce" had begun in eastern Ukraine but a long-lasting peace with pro-Russian separatists would still take some time.

His upbeat comments come with EU nations – struggling with a migrant crisis – hoping for signs of a de-escalation after the conflict stoked tensions in eastern Europe. "There has not been a single shot fired," the pro-Western leader said in a televised address to students undergoing military training in Kiev. But he added: "This is still not peace. This is not the end of the war. "The end of war will come when every patch of Ukrainian soil is liberated from the enemy, the occupant, the aggressor. But this is not simply a ceasefire – this is a real truce." His point was underscored when the Ukrainian army later accused the rebels of violating the ceasefire and "cynically" firing a rocket that injured four government troops.

"Today illegal armed groups, cynically ignoring the peace agreements, violated the ceasefire ... The fighters carried out an attack with an anti-tank missile," the Ukrainian military said in a Facebook post. Poroshenko's remarks came a day after the separatists delayed until next year local elections they had planned for the coming weeks.

The conciliatory gesture came in response to strong Western pressure for Russian President Vladimir Putin – who denies any involvement in Ukraine's affairs – to persuade the militias to put their vote on hold. Poroshenko had called the planned elections "fake" and branded them another example of the rebels' refusal to commit to a truce agreed in February. The ceasefire was often broken but has largely held in the past month.

Moscow and Brussels also welcomed the rebels' announcement on the elections. Western diplomats believe the delay gives time for polls to be conducted in line with Ukrainian and international laws. No firm date for the local votes in Lugansk and Donetsk had been set.

Ukrainian Foreign Minister Pavlo Klimkin told lawmakers that no separatist polls could be held until Russia withdrew all its troops and military hardware from the war zone. President Vladimir Putin denies sending troops across the border, saying the Russian fighters captured in the rebel regions are "volunteers" who follow "the call of their heart."

Ukrainian forces on Tuesday began withdrawing tanks from the demarcation line with Lugansk – the smaller of the industrial regions resisting Kiev's leadership. The Lugansk insurgents said in a statement that they had already finished moving smaller weapons 15 kilometers (9 miles) away from a line separating their forces from the rest of the ex-Soviet state. Both pullbacks conform to a new deal signed by the warring sides on Sept. 1.

The Organization for Security and Co-operation in Europe – a Cold War-era body responsible for both monitoring the truce and organizing talks on an end to the war – said its staff would be unable to confirm either claim until Friday.

Poroshenko on Wednesday also stressed both regions must abandon aspirations of establishing closer diplomatic and trade ties with Russia. "Thanks to the arms withdrawal agreement and the ceasefire, God willing, this will evolve into a stable cessation of hostilities," said the 50-year-old leader. "And in that case, we will have a chance to achieve peace and – of this, I am certain – the return of the occupied lands." The 18-month insurrection – the bloodiest in Europe since the Balkans crises of the 1990s – has killed more than 8,000 people and driven about 1.5 million from their homes. It has also further eroded Putin's relations with Washington and Brussels, an isolation that threatens to worsen with Russia's air campaign in support of Syrian leader Bashar Assad.