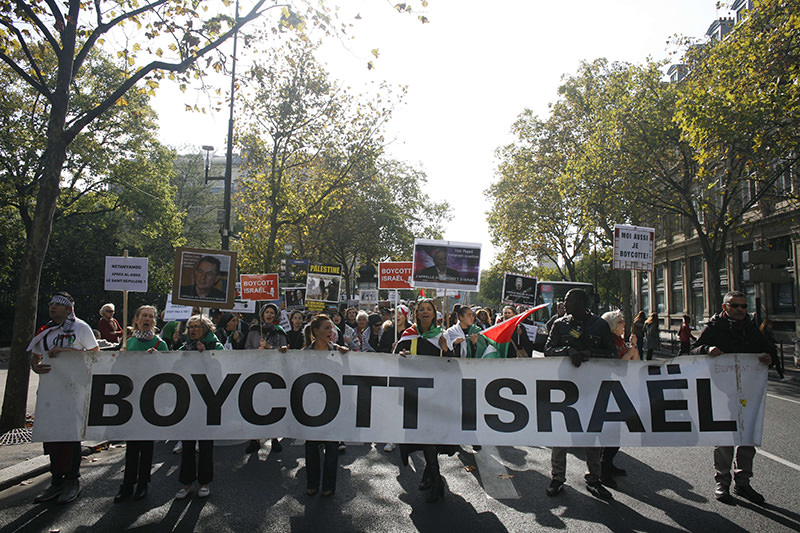 People take part in a pro-Palestinian demonstration on October 10, 2015 in Paris, calling for a boycott of Israel and for the recognition of the State of Palestine (AFP Photo)
by Anadolu Agency
Oct 10, 2015 12:00 am
Hundreds of people rallied on Sunday in the French capital Paris to call on their government to recognize the state of Palestine.

Demonstrators marched from Chatelet to the Place de la Republique square in Paris, raising Palestinian flags and singing slogans "Free, Free Palestine", "Boycott Israel" and "We are all Palestinians".

The rally, dubbed "Time has come, It is now" was called by a group of NGOs and pro-Palestine associations such as the France Palestine Solidarity.

"Not a day goes by without young Palestinians losing their lives. We cannot let this aggression continue against the right of Palestinians to exist on their own land," said the association in a statement

"France must firmly condemn Israel... require immediate sanctions against it. France has to assume its responsibilities and recognize the state of Palestine," added the association.

"I'm here to call for peace. I'm Jewish and I want my country France to impose on Israel the recognition of the State of Palestine," Yohan, 43, told Anadolu Agency, holding a sign that said "Yes For Palestine, Yes for the Peace".

"I came to show my solidarity with the Palestinian people against the Israeli occupation and call on my country to recognize Palestine as a state," Madjid Measaoudene, member of the city council of Seine-Saint-Denis, told Anadolu Agency.

Both the French Assembly and Senate adopted in December 2014 resolutions calling their government to recognize Palestine' statehood. The French foreign minister Laurent Fabius has said that France would do so in "the appropriate time".

In the past 24 hours alone, nine Palestinians were killed and around 200 were injured by live ammunition and rubber bullets across Jerusalem, the West Bank and the Gaza Strip, according to the Palestinian Ministry of Health.
Last Update: Oct 11, 2015 3:19 pm