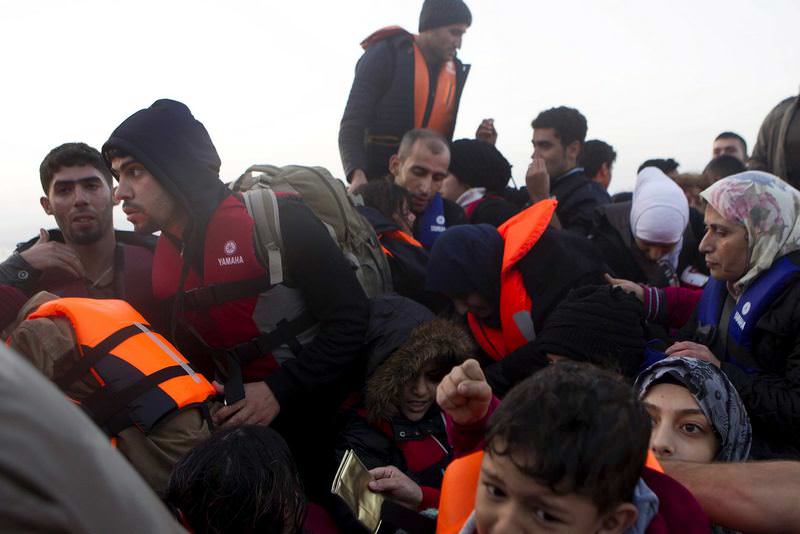 by reuters
Oct 10, 2015 12:00 am
He stood on the mud, crows cawing overhead, pointing at unmarked graves. "Here's a mother with her baby. And here's another young woman. Over there, that's a 60-year-old man." Buried beneath low mounds of earth, facing Mecca, lay Afghan, Iraqi and Syrian refugees who drowned this summer in the Aegean Sea trying to reach Europe in flimsy inflatable boats. Scanning the area, Christos Mavrakidis, a somber, hardened man who looks after one of the main cemeteries on Greece's Lesbos island, listed the years of other deaths - "2013, 2014, 2015". Now there is no room left in the narrow plot of land in the pauper's section of St. Panteleimon cemetery, close to where the colonnaded tombs of wealthy Greeks are built in the classical Greek style, and flowers adorn lavish marble graves. "Something must be done," he said. "They are a lot. They are too many." No one can say where the next bodies will be buried.

Nearly half a million people, mostly Syrians, Afghans and Iraqis fleeing war and persecution, have made the dangerous journey to Europe this year. Almost 3,000 have died, the U.N. refugee agency estimates. Just 4.4 km (2.8 miles) off the Turkish coast, Lesbos, Greece's third-biggest island and popular with tourists, is one of the preferred entry points for migrants into the EU. Arrivals surged in late summer to sometimes thousands a day as people rushed to beat autumn storms that make the Aegean Sea even more treacherous.

The number of burials at St. Panteleimon has also risen. More than three dozen migrants are buried in a tiny, dusty plot on a hill overlooking the island. Four were buried there last week alone. Some of the makeshift, earthen graves bear a small marble plaque with a name in paint or marker: "Saad 4-9-2015." Others state simply: "Unknown 25-8-2015"; "Unknown 28-8-2015"; "No 14 5-1-2013". The most recent graves lack any marking. Mavrakidis placed his hand over his mouth and nose, the air filled with what he called "the stench of death" rising from the open grave of a young Iraqi man whose body was exhumed that morning after his family managed to trace him through DNA. Many more dead have never been found. Locals say fishermen sometimes dump bodies back into the sea, like fish they are not permitted to catch, to avoid having to hand them over to the authorities and face questioning and bureaucracy.

The impact of the huge migration flow into Europe is visible across Lesbos, an island with a history of mostly Greek refugees who fled Asia Minor in the 1920s. Restaurants and shops now have menus and signs in Arabic. Cafes are full of refugees charging mobile phones. The long shoreline near the airport has turned bright orange from hundreds of discarded life jackets. But nowhere is their uncertain fate starker than at St. Panteleimon, patron saint of the sick and destitute. Every village on the island has its own cemetery but spaces are limited to less than a dozen for the locals. Refugees were buried at St. Panteleimon also because it was well-guarded, even from stray dogs who roam at night, Mavrakidis said. Local relief organizations accuse the authorities of doing little to address the space problem. Efi Latsoudi, a volunteer who helps organize funerals for refugees, says she is tired of hearing "we have no budget, it's not our responsibility". Even the island's morgue complains it is running out of space to keep the bodies, pushing for more burials, she said. "It's someone's responsibility. And if it isn't, someone should claim it," Latsoudi said.

The island's mayor, Stavros Galinos, says he has never made money an issue despite being stretched financially because of the country's prolonged economic crisis. "This is a humanitarian issue and I would never weigh it on the same scale as the financial issues," he said at his office overlooking the port from which thousands of refugees depart for the mainland every day. "There's a problem and we're trying to solve it. People are drowning every day so we're looking for space," he said. "Not only do we have to manage living migrants, we have to manage the dead as well."

Afghan refugee Mohammad Talib Jabarkhail, who sought help from the same association that organizes funeral and prayers for the dead, was among the lucky ones who reached Europe alive. Some of his friends were killed in a suspected U.S. air strike on an Afghan hospital run by aid group Medecins Sans Frontieres (MSF) in Kunduz, he said. "I escaped from Afghanistan because I was targeted. Islamic State of Iraq and al-Sham and the Taliban threatened me three times," said Jabarkhail, a 30-year-old community worker and women's rights activist who worked for foreign NGOs. The three-week trip to Europe through Pakistan, Iran and Turkey with his cousin and nephew cost 2,500 dollars in bribes to various people, including a man code-named "Red Apple." They were shot at by Iranian police and kidnapped and robbed on the Iranian-Turkish border, leaving him with no money to continue his journey to his desired destination: Germany. His wife and four young children are left behind, waiting. Like others who set off on this dangerous journey, Jabarkhail said he was well-aware of the risk of death on the way. "When I started my journey I had two options: to reach Europe, or to die. This is the reality," he said.