Xenophobia on the rise in Vienna; anti-refugee party gets record vote in election for city hall 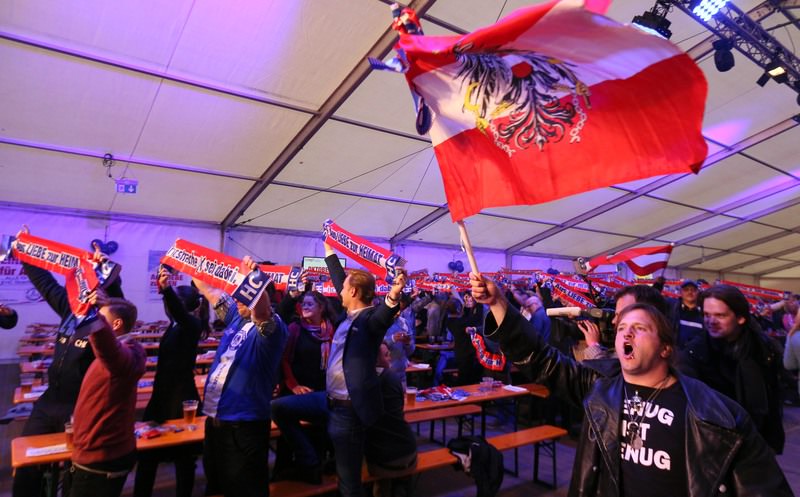 by Daily Sabah with Wires
Oct 11, 2015 12:00 am
Europe's migrant crisis helped Austria's far-right on Sunday post its best-ever election result in Vienna, although its score was weaker than predicted and the centre-left retained power in its traditional fiefdom.

The results leave the Socialists in position to continue governing the Austrian capital in coalition. Still, they give the Freedom Party its best ever result. They also reflect voter anxiety about the thousands of migrants entering Austria daily as they flee conflict in the Mideast and elsewhere.

The preliminary results showed the Green party with nearly 12 percent support. That would leave them in position to remain as the Socialist coalition partners. Losing significant backing was the centrist People's Party at 9.5 percent, more than 4 percentage points below their 2010 showing.

Also clearing the 5 percent hurdle needed to gain seats in the Vienna legislature were the liberal NEOS, according to the preliminary results. Contesting their first Vienna elections, they won 6.2 percent of the vote.

With another five-year term for his Socialists a virtual certainty, Vienna Mayor Michael Haeupl said he could "could live well" with the results. Alluding to the Freedom Party's anti-immigrant message, he said he remains convinced that people fleeing terror and hunger have to be helped, adding "that's what I have stood for in my whole political life."

Polls ahead of the vote had shown the Socialists in front with more than a third of the vote, but with the Freedom Party close behind.

The Freedom Party already has made huge gains in several provincial elections this year, at the expense of the Socialists and the centrist People's Party, but it has not won outright. Those establishment parties have governed on all levels in Austria with few exceptions since the end of World War II.

Runoff mayoral elections also are being held Sunday in 44 communities in Upper Austria province. But "Red Vienna" was a special prize. The city has been governed by the Socialists since the end of World War II.

Austria has seen more than 200,000 migrants enter the country since the beginning of September, most of whom travel onwards to Germany or Scandinavia.

But the government still expects some 85,000 asylum claims this year, making the Alpine country of 8.5 million people one of the highest recipients in Europe on a per-capita basis.

Strache, a former dental technician, has called for Austria to copy Hungarian Prime Minister Viktor Orban and put fences up at its borders -- something rejected by Chancellor Werner Faymann of the SPOe.
"Every property owner does this with his house, putting a fence around his garden and not leaving the doors and windows open, so unwelcome guests don't come," Strache said earlier this year.

But emulating Marine Le Pen, the head of France's far-right National Front, Strache has also toned down the anti-immigration rhetoric seen in earlier campaigns in his 10 years as FPOe chief.

Gone are the slogans vilifying Islam. The posters all over Vienna were more subtle: "Help for our poor", they declare, adding in smaller letters "Instead of open doors for economic migrants".

At the same time, Strache -- who will now turn his sights on becoming chancellor at the next general elections due in 2018 -- campaigned on traditional SPOe issues like alleviating poverty.

"He has shifted his political discourse," political analyst Anton Pelinka told AFP. "The xenophobic root was still there, but in a more latent form."
Last Update: Oct 11, 2015 10:44 pm