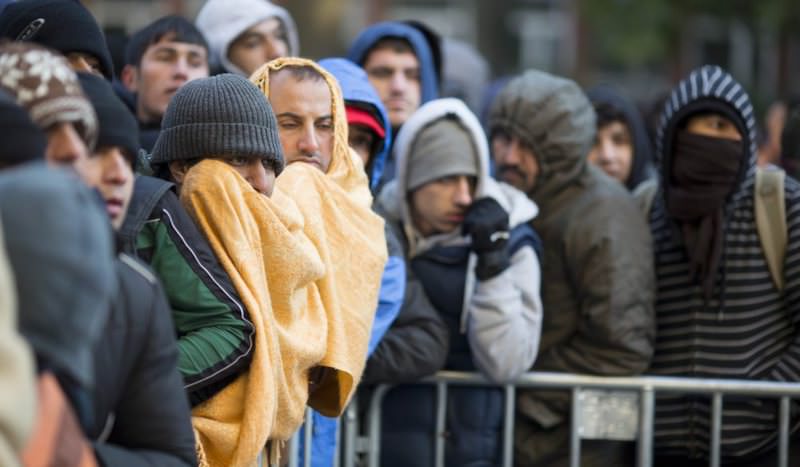 Refugees and migrants try to keep warm during temperatures around freezing as they wait to register and be allocated a sleeping place on the premises of the State Office of Health and Welfare (LaGeSo) in Berlin, Germany.
by Daily Sabah with Reuters Oct 13, 2015 12:00 am

Having seen a record number of refugees this year amid its own economic crisis, Greece's new migration minister urges several European countries to stop setting certain criteria for picking refugees to accept in the EU relocation program before it turns into a ‘human market'

The European Union must stop countries picking and choosing which refugees they accept in its relocation program, otherwise it will turn into a shameful "human market," Greece's new migration minister, Yannis Mouzalas, said.

The EU has approved a plan to share out 160,000 refugees, mostly Syrians and Eritreans, across its 28 states in order to tackle the continent's worst refugee crisis since World War II. The first 19 Eritrean asylum seekers were transferred from Italy to Sweden on Friday. Some countries, such as Slovakia and Cyprus, have expressed a preference for Christian refugees and Hungary has said the influx of large numbers of Muslim migrants threatens Europe's "Christian values."

Mouzalas said in an interview that Greece was having trouble finding refugees to send to certain countries because the receiving nations had set a series of criteria. He declined to name the states concerned. "Views such as 'we want 10 Christians,' or '75 Muslims,' or 'we want them tall, blonde, with blue eyes and three children,' are insulting to the personality and freedom of refugees," Mouzalas told Reuters. "Europe must be categorically against that."

An EU official said a group of Syrian refugees was due to be relocated from Greece to Luxembourg under the EU scheme around Oct. 18, the first to be officially reassigned from Greece. A gynecologist and founding member of the Greek branch of aid agency Doctors of the World, Mouzalas urged the EU to enforce strict quotas, "otherwise it will turn into a human market and Europe hasn't got the right to do that." The refugees are generally not allowed to select the country to which they are assigned.

Greece has seen a record of about 400,000 refugees and migrants, mainly from Syria, Afghanistan and Iraq, arrive on its shores this year from nearby Turkey, hoping to reach wealthier northern Europe. Those who can afford it move on quickly to other countries, sometimes on tour buses taking them straight from the main port of Piraeus, near Athens, to the Macedonian border. But several thousand, mostly Afghans, have ended up trapped in Greece for lack of money. European authorities are reluctant to treat Afghans systematically as refugees, and a result, they are shut out of the relocation process. "It's absurd to think that Afghans are coming to find better work. There is a long-lasting war, you aren't safe anywhere, that's the reality," Mouzalas said.

Its economy and public services depleted by six years of deep crisis, Greece has struggled to cope with the numbers both in terms of registering the refugees and looking after them while they are in the country. International concern at the influx through Greece has been highlighted by a spate of high-profile visits this month including Austrian Chancellor Werner Faymann, the EU's migration commissioner, the United Nations High Commissioner for Refugees, European Commission president, Luxembourg's interior minister and a group of U.S. senators.

Aegean islands closest to Turkey reached a breaking point this summer, overwhelmed by the number of arrivals. Registration was lengthy, and many ended up sleeping rough in the street as they lacked the facilities to house them. Mouzalas said five so-called hotspots to register and identify arrivals on the preferred entry points of Lesbos, Kos, Chios, Leros and Samos would start operating within a month, ahead of schedule. Greece hopes to relocate about 10,000 people every two months, or 70,000 in a year, he said. It has also committed to creating two centers for 8,000 to 10,000 people in total, rather than ones with a capacity of 15,000 people as the EU anticipated avoiding "turning the country into a refugee camp," he said. It will request additional EU funds beyond the 33 million euros ($37.48 million) it has received so far and has asked European partners to send more officials to help register and process refugees. Some are expected later this month, notably from Austria.

Still, Greece's biggest problem remains its vast and porous sea border. Refugees cross from Turkey in small, inflatable boats often packed to three times their capacity. Thousands have died but many more continue to attempt the perilous journey. Mouzalas said Athens had resisted pressure to step up naval patrols to stem the flow and could not legally detain the refugees, who were free to move on. "We cannot control the flow through the sea; you would have to sink boats," Mouzalas said. "You need legal ways otherwise the smugglers manage the flow." He called on the EU to treat Turkey generously and offer it "incentives and rewards" including financial support to accommodate refugees there, and said the two countries would consider closer cooperation between their coastguards.

Greece hoped to use a winter lull to prepare itself for next summer. "But if Damascus falls tomorrow, there is no heavy sea that will hold them back. The flow will increase and the number of deaths will rise," he said.

More than 600,000 people have flooded into Europe so far this year, mainly arriving by boat to Greece and Italy. More than 3,000 have died over the same period trying to cross the Mediterranean to Europe. Several rights groups, international organizations and world leaders have repeatedly emphasized the necessity of international collaboration and a comprehensive response to the crisis.
RELATED TOPICS