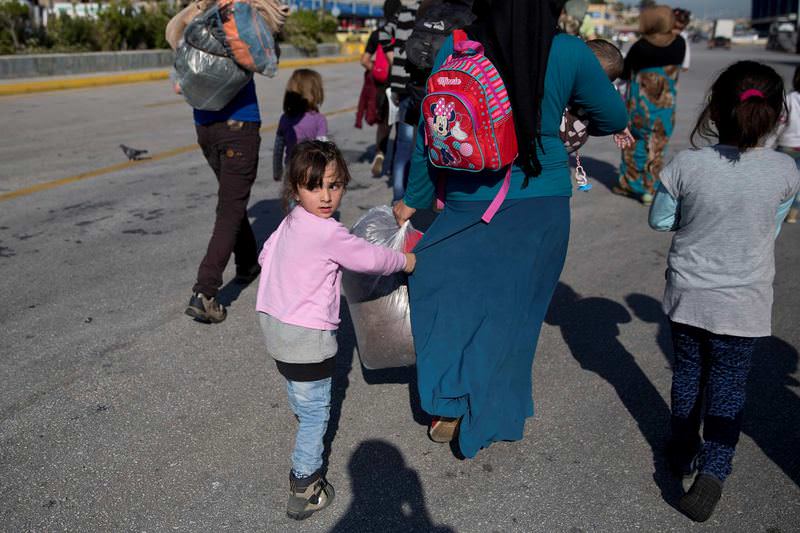 Syrian refugees arrive from Lesbos island at the Athens' port of Piraeus in the hope of reaching Western European countries to be re-located.
by Daily Sabah with Wires
Oct 17, 2015 12:00 am

As thousands of refugees continue to knock on EU doors, the U.N. warned the 28-country union to establish more reception centers while the EU seeks to tighten security measures on its borders

The European Union needs to quickly establish adequate reception centers in Greece to register asylum seekers and then distribute them across the bloc before winter sets in, the United Nations refugee agency said on Friday. "This is not a crisis at the moment that is being adequately managed. It is vital these measures be put in place," UNHCR spokesman Adrian Edwards told a news briefing in Geneva. Edwards, asked to comment on the proposed "action plan", said: "I think the underlying principle remains the same, we are glad to see an agreement dealing with smugglers and trafficking. "At the same time it is important that asylum needs are kept in perspective," he added.

Despite the urges and warnings, the EU countries prefer tightening security measures to prevent the refugee flow. European Union leaders agreed Thursday to boost the protection of its outer frontiers to help contain the refugee emergency and gave its border agency more clout to deport people who do not qualify for asylum.

Senior EU officials also complained that many member states had failed to live up to pledges to provide more funds, and experts to help fingerprint and screen people. The meeting came as the International Organization for Migration said that more than 600,000 people had arrived by sea into Europe this year and more than 3,000 of them died trying to reach Europe to escape war or poverty. Many entered through Greece from Turkey home to some 2 million Syrian refugees who have overwhelmed the country's coast guard and meager reception facilities. The one positive note on Thursday was the agreement to boost the Frontex border agency, as the EU mulls whether to set up a European border guard, which could help patrol Greece's patchwork island border with Turkey. "In the coming months, the agency will develop into a more operational body," EU Council President Donald Tusk said. "Our aim is to give Frontex the right to return irregular migrants on its own initiative and to make it more proactive in protecting external borders." Estimates based on EU figures suggest that possibly a third of the people arriving in Europe might not qualify for asylum.

But no fresh pledges of money were made, despite a promise by the leaders last month to stump up hundreds of millions of euros for Syrian refugees and to help Africa better manage its borders. "We are lacking 2.3 billion euros to be provided by member states," European Commission Jean-Claude Juncker told reporters after the summit. However, he said, the leaders promised this time that they would come up with the funds "in the next couple of weeks." The Commission has complained that only three of 28 nations have pledged a total of just 12 million euros ($13.7 million) to a fund to help African nations better manage their borders. The pot is meant to total 1.8 billion euros (about $2 billion) over two years. Frontex and the EU asylum office have appealed for a total of around 1,000 officers to help fingerprint people and decide whether they are eligible for asylum. So far, about a dozen of the 28 EU nations have offered around 130 personnel. "We can, and must, do much better," Tusk said, adding that the influx of migrants could get much worse.

In their final statement, the leaders gave "political support" for an action plan for Turkey to help it manage its own refugee emergency, but a final agreement proved elusive and discussions in Ankara will continue in coming days.

Meanwhile, thousands of people continue to risk the dangerous journey daily. Greece recovered seven more bodies off the island of Lesbos Thursday after a migrant boat collision, and shivering newcomers streamed into Croatia seeking aid and shelter. In the Balkans, rain storms sweeping through Serbia and Croatia caught thousands as they made their arduous trek, leaving them standing in fields between two countries, in bitter weather, waiting for transport to destinations in western Europe. Jelena Grbic from the Doctors Without Borders aid group said that often migrants arrive unprepared for cold weather, affecting women and children especially. "They have no winter clothes. Then they get respiratory diseases. Coughing, infections, fever, then they are completely exhausted," she said.

Croatian Foreign Minister Vesna Pusic, visiting the site, urged the EU leaders to boost external borders instead of putting up fences inside Europe, as neighboring Hungary has done. "This is the turning point when Europe is deciding whether it will be marked by walls and barbed wires or whether it will be a reasonable continent of cooperation that uses political means to address the causes of such misery," she said.