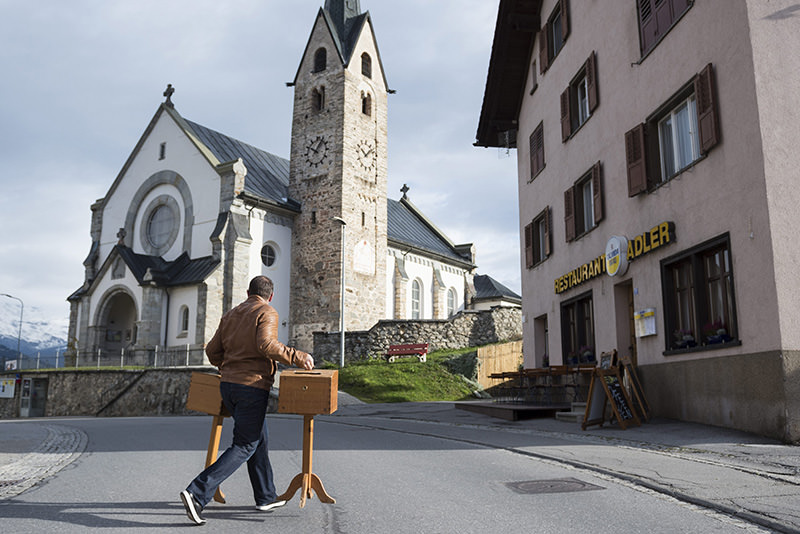 by French Press Agency - AFP
Oct 18, 2015 12:00 am
The Swiss pick a new parliament on Sunday, with the populist and anti-immigrant right expected to strengthen its already dominant position amid concerns over migration and asylum rules.

Polling stations are only be open for a few hours, closing by noon (1000 GMT), as most Swiss vote in advance by post or online, and the first projections should begin ticking in by 3:00 p.m. (1300 GMT).

The expected shift comes as surging numbers of migrants and refugees moving through Europe have heightened the focus on the issue in Switzerland, even though the wealthy Alpine nation has yet to be significantly affected by the crisis.

About a quarter of Switzerland's eight million inhabitants are foreign nationals, and immigration and asylum policies tend to figure among voters' top concerns.

But the latest survey from the gfs.bern polling institute showed that 48 percent of those questioned thought migration was the most important issue facing the country.

SVP vice president and most outspoken member, Christoph Blocher, insisted earlier this month the party was the only one that could solve Switzerland's "asylum problem", and "eliminate the chaos".

SVP, which has previously sparked outcry with campaign posters like the one of three white sheep kicking a black sheep off the Swiss flag, has in its national push this year been less provocative, resorting mainly to posters featuring pictures of candidates with the slogan "Stay free".

But some regional divisions of the party have gone much further, with the Vaud youth unit putting out a poster featuring the caricature of a jihadist, wearing an EU armband, preparing to decapitate a bound and gagged blond woman wearing a Swiss flag tank top, flanked by the caption: "Keep your head on your shoulders".

That poster also plays to the second top concern among the Swiss, according to the latest gfs.bern poll.

Nine percent in that survey said they were most concerned about Switzerland's relationship with the European Union, which was badly hit by a narrow Swiss popular vote in February 2014, championed by the SVP, in favor of restricting immigration from the bloc.

The center-right Liberals, in third place, are also expected to gain ground, helping to move the pendulum in parliament towards the right.

The party is meanwhile unlikely to help SVP push through its more radical positions, since it takes a very different stance on a range of issues, including on the question of immigration.

"We have no migrant problem in Switzerland today," said Fathi Derder, a parliamentarian for the Liberal Party, insisting instead that the country "is facing a dire lack of qualified labor".

"Instead of thinking about closing our borders, we should be rolling out the red carpet for the people that the Swiss economy so desperately needs," he told AFP recently.

The Socialists, Switzerland's second largest party, are also expected to inch up slightly in the polls, while the Christian Democrats, the Greens and other smaller parties in the house are expected to take a hit.

In all, 246 seats are up for grabs -- 200 in the lower chamber and the remainder in the upper chamber.

Power-sharing and consensus rule are the norm in Switzerland and elections rarely lead to major shifts in parliament or the makeup of the government, which does not directly reflect the power balance in the house.

And Switzerland's famous system of direct democracy allows citizens to voice their opinions on a large range of issues every few months, downplaying the importance of the parliamentary vote.