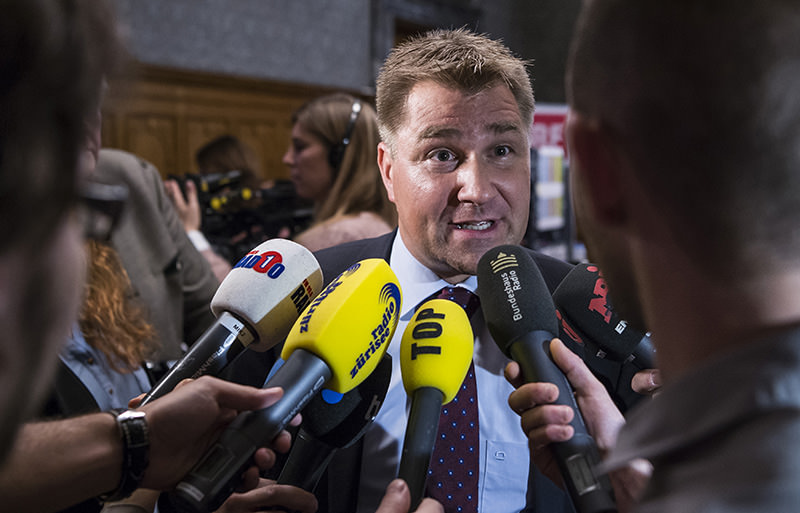 by French Press Agency - AFP
Oct 19, 2015 12:00 am
Swiss voters swung to the right in parliamentary elections on Sunday dominated by concerns over Europe's migrant crisis, with the country's largest party, the populist Swiss People's Party, on track to win a record number of seats.

The Swiss People's Party (SVP) was seen raking in 29.5 percent of the vote, compared to the 26.6 percent won in 2011 and beating its previous record score of 28.9 in 2007, the national broadcaster RTS projected.

That should allow the party, known for its virulent campaigns against immigration, the European Union and Islam, to seize 65 of the 200 seats in the lower house, up from the current 54.

Along with advances made by the center-right Liberal Party, Switzerland's third-largest party, which was seen taking three additional seats in addition to its current 30, SVP's gains should tip the scale in parliament from the center-left towards a center-right majority.

Pascal Sciarini, a political scientist at Geneva University, told AFP, that the 11 additional seats for SVP marked "a huge shift in Swiss politics," adding that "the center of gravity has clearly shifted to the right."

The Socialists, the country's second-largest party, were meanwhile seen shedding two of their current 46 seats, while the Greens and Green Liberal Party were seen losing five and six seats respectively.

The shift to the right comes as surging numbers of migrants and refugees moving through Europe have heightened the focus on the issue in Switzerland, even though the wealthy Alpine nation is yet to be significantly affected by the crisis.

"We have to make Europe less attractive and send a signal that we cannot give asylum here, not even to refugees of war," SVP chief Toni Brunner told AFP.

Parties to the center and left meanwhile lamented that the pre-election campaign had been so dominated by the migrant issue.
"People voted out of fear," Socialist candidate Rebecca Ruiz told RTS.
About a quarter of Switzerland's eight million inhabitants are foreign nationals, and immigration and asylum policies tend to figure among voters' top concerns.

But the latest survey from the gfs.bern polling institute showed that nearly 50 percent of voters considered migration the most important issue facing the country.

"I think there is a lot at stake, not only when it comes to the reception of refugees, but also the entire problem of the large numbers on the move," Colette Morel, a 69-year-old retired teacher, told AFP as she cast her ballot in the central canton of Fribourg.

"SVP did not even need to run a campaign. The migrant crisis ran the campaign for them," Sciarini said.

Among the SVP parliamentarians already sure to take a new seat was Magdalena Martullo-Blocher in Graubunden.

She is the daughter of controversial politician Christoph Blocher, an SVP vice president who served in government from 2004-2007 before being pushed out over his extreme positions and confrontational style.

He insisted earlier this month that his party was the only one that could solve Switzerland's "asylum problem" and "eliminate the chaos".

SVP members also credited the party's opposition to closer ties with the EU for its advance.

Relations with the bloc, Switzerland's top trading partner, have been badly hit by a narrow Swiss popular vote in February 2014, championed by the SVP, in favor of restricting immigration from the 28-member EU.

The center-right Liberals are expected to cooperate with SVP on economic and energy issues but take a very different stance on other subjects, including immigration.

It remains unclear however what impact the shift in the lower house will have.

The makeup of the upper house, which counts 46 seats and has an equal legislative say, remains unclear, with a second round of voting required in many cantons.

In any case, power-sharing and consensus rule are the norm in Switzerland and the power balance in parliament is not directly reflected in government.

Once the new parliament is in place, it will in December elect the government, with the seven posts traditionally shared among the major parties from right to left under a tacit decades-old agreement dubbed "the magic formula", aimed at ensuring political stability.

Despite being the country's largest party, SVP holds just one seat. It has its eye set on a second seat, which could be easier with a center-right majority parliament.