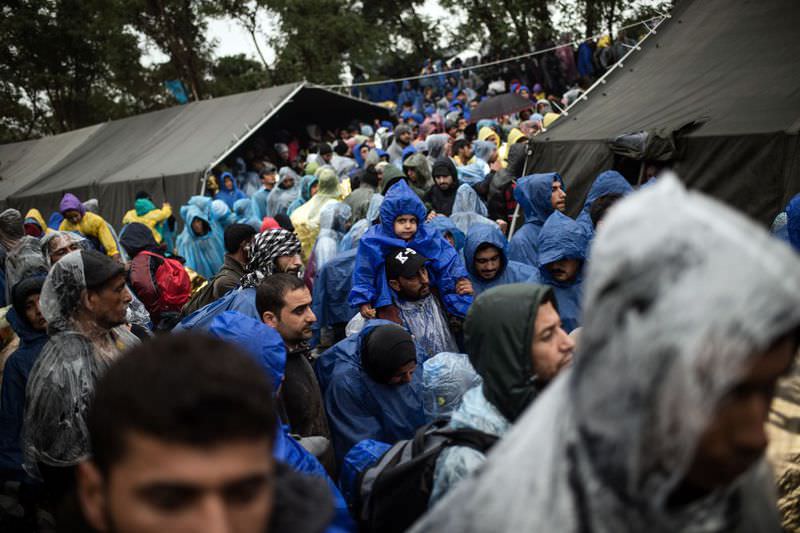 Migrants wait to enter Croatia at the Serbian-Croatian border near the western Serbian village of Berkasovo.
by Daily Sabah with Wires Oct 20, 2015 12:00 am

A human bottleneck occurred on the western Balkan route as Slovenia only allowed a limited number of refugees to cross into its territory. Thousands of refugees are stranded in heavy rain and cold weather with volunteers urgently calling for help from authorities

Thousands of beleaguered migrants, including many women and children, have spent a night in rain and cold in the Balkans as the countries quarrel over how to handle the large influx of people.

Many were stranded at Croatia's border with Slovenia after Croatia sent a train there despite Slovenia's refusal to take the people into the country. The train carrying about 1,800 people arrived in the early hours of yesterday. Hundreds of migrants were also left waiting in the mud on the border between Serbia and Croatia, after Croatian police put up gates to control their influx.

An AFP reporter described the scenes of chaos at the Berkasovo border between Serbia and Croatia, where people were sitting in the mud trying to light fires to stay warm while children walked around barefoot, lacking proper clothing for the torrential rain and cold temperatures. "This is over our capacity. We urgently need Serbian authorities to react. There is no one from the authorities here. We need police, army, some tents, food," said Jan Pinos, part of the coordinating team of Czech volunteers. He said there was "increasing tension" and a large number of pregnant women and children, including a baby that nearly died overnight in the chaos and crowds.

Croatian police ordered the migrants off the train, but Slovenian police were deployed to the border and put up iron barriers to prevent a mass entry. For hours, the migrants sought ways to sneak into Slovenia on foot while Croatian police on the other side prevented them from turning back.

Slovenian police said they would first register women and children from the train and let them into the country, while the rest remained stranded out in the open on a field amid driving rain.

The border incident has caused a diplomatic spat between Croatia and Slovenia, with Slovenia accusing Croatia of breaching an earlier agreement that only 2,500 people can be transported into the country each day. That figure appeared to have been reduced by the Slovenes to 1,500 a day because they said that's how many neighboring Austria allow across its border each day.

After Austria denied it is restricting the flow, Slovenia's interior minister said her country can handle up to 2,500 migrants a day and lashed out at Croatia for transporting more than the agreed figure to their border, saying it is "absolutely unacceptable." Vesna Gyorkos Znidar said that Croatia has started to send an "unlimited number of migrants ... which we can't accept." She said "the Croatian side is not responding" to the Slovenian demands to control the flow and is acting only as "a transporter" of migrants.

Tension was building among the thousands of people fleeing war and poverty in the Middle East, Africa and Asia, and seeking to head toward Western Europe. They have been stranded in the cold weather in the Balkans since Hungary closed its border with Croatia early Saturday and the flow of people was redirected to the much slower route through Slovenia.

Around 4,000 migrants were stranded yesterday in a camp near the Croatian border with Serbia waiting for trains and buses to take them west, closer to their goal of reaching wealthier EU countries such as Germany and Sweden. On the Croatia-Serbia border, some of the migrants, who were stranded there overnight after Croatian police block their movements, were seen handing over their children to Croatian police across metal barriers. Fed up by the blockade, the migrants were walking in groups, taking routes through orchards and corn fields away from a border passage that has served as a crossing point for weeks. Families with children, men and women were seen walking in mud and cold in search of new paths to cross over.

The reduced flow of the migrants on the so-called Balkan route could cause a large backlog of people in Croatia, Serbia and Macedonia. "We are in cold weather and the place is not good ... Our message for the governments is to take into consideration our suffering," said Farouk Al-Hatib from Syria as he waited to cross into Croatia from Serbia.

The turmoil in the Middle East, Africa and the five-year war in Syria have led many people to flee the conflict in an attempt to seek security and shelter in a more prosperous and peaceful country, such as in Europe. Compared to Syria's neighboring countries, the U.N. refugee agency encouraged European countries to do more to share the burden of the international community in the refugee crisis.
RELATED TOPICS