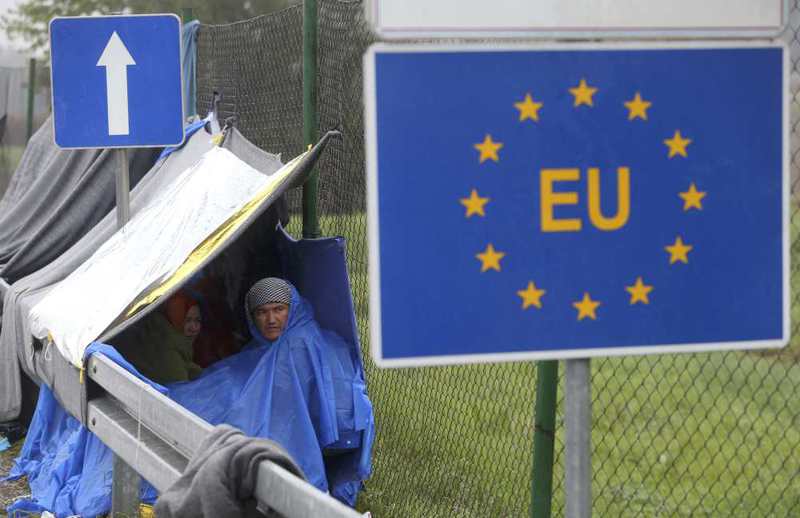 With temperatures sometimes reaching zero in Europe, concerns rise over the health of thousands of refugees who are stuck outdoors. Amid airstrikes in Syria, a new refugee wave is expected and aid groups have warned the situation has already become critical

As winter has begun knocking on Europe's door, thousands of refugees struggle with heavy rain and cold weather in different European cities. The new airstrikes in Syria are expected to bring a new wave of refugees into Europe. At least 70,000 Syrians have already fled a regime offensive backed by Russian fighter jets on opposition-held areas south of the city of Aleppo in the past three days.

Analysts warn that over 2 million Syrians could flee their homes if Aleppo falls to Syrian President Bashar Assad's regime or ISIS. NATO member Turkey fears that the number of the already 2.2 million refugees in the country could almost double and lead hundreds of thousands to attempt to cross from Turkey to the EU.

Meanwhile, those who managed to cross to the EU face the approaching winter amid falling temperatures. Thousands of people trying to reach the heart of Europe keep surging across Serbia's border into Croatia and some of them into Slovenia. The miserable wave of humanity left behind a field scattered with soaked blankets, mud-caked clothing and water-logged tents as they headed for Slovenia, the next obstacle in their quest to reach richer European Union nations via the Balkans.

Monday's surprise move to reopen the Serbian border of Croatia allowed an estimated 3,000 more migrants to enter Croatia bound for its small Alpine neighbor, which also has been struggling to slow the flow of humans across its frontiers and faced another wave of trekkers seeking to reach Austria and Germany to the north. "Without any announcement, the borders opened. When the borders opened, everybody rushed," said Melita Sunjic, a spokeswoman for the U.N. refugee agency, who was stationed at the Serb-Croat border. Many had discarded their mud-soaked socks and walked only in sandals or slippers through the ankle-deep muck in the driving rain, frigid winds and fog.

Slovenia's Interior Ministry said some 5,000 people had reached its borders Monday, and most were allowed to enter, with at least 900 reaching Austria by the evening. Slovenia had vowed to let in no more than 2,500 migrants per day. Officials in Serbia, Slovenia and Croatia all accused each other of making a bad situation worse.

When the day's first train carrying an estimated 1,800 people stopped near Slovenia shortly after midnight, they found their path blocked in both directions by rival deployments of Croat and Slovene police, each arguing the trekkers must seek shelter in the other country. This created a no-man's land on the border, where many were forced to spend the night in the open in the bitter cold and pelting rain. Some piled up soggy tree branches for fires.

Before the Croat authorities lifted the border restrictions on Monday, parents desperate to get their children out of the cold and rain could be seen handing them over the security barriers to police. Many others fed up with waiting in the rain tried to outflank police positions, walking through muddy orchards and cornfields. "We are in cold weather and the place is not good," said Farouk al-Hatib, a Syrian who was waiting to cross from Serbia. "Our message for the governments is to take into consideration our suffering."

Meanwhile, the temperatures in Germany have also begun to tumble close to freezing. Some say the German winter, infamously harsh and biting, has not even begun. At the major northern port, as in other parts of the country, sleeping without heating is quickly becoming a nightmare as the temperatures tumble close to freezing. In Hamburg alone, 4,000 asylum seekers are sleeping in unheated tents, and some migrants, fed up with the cold and damp, have taken to the streets to complain about their lodgings. "We are freezing," they wrote on a cardboard sign. But the problem is not unique to the city. With between 800,000 and 1 million asylum seekers expected this year, Germany is facing an unprecedented refugee relief crisis.

And the situation has become critical, warned Ulrika Kostka, director of aid group Caritas. "We can no longer rule out the risk that people could die" from the cold, she was quoted as saying by newspaper Tagesspiegel. In the eastern Saxony region, the Red Cross also sounded a similar warning about tent cities. "It has become a health problem. People are falling ill because of the cold," said spokesman Kai Kranich. "We have distributed all the sleeping bags and blankets that we have but they are not enough." Mobile heaters have been placed in tents to provide some warmth for now, said Kranich, but he warned that it was only a temporary solution.

German authorities have been scrambling to find lodgings for the record number of new arrivals. In Berlin, a special hall that is used every January for an annual agriculture exhibition, has been transformed into an emergency shelter with bunk beds for 1,000 refugees. Winfried Kretschmann, the Greens party leader of Baden-Wuertemberg state, has warned: "We don't have a magic wand to create lodgings." "At the moment we are managing, but it's going to become more difficult," he said during a meeting of state premiers.

Last week, EU border agency Frontex announced that 710,000 refugees entered the EU in the first nine months of this year, which was 282,000 in 2014. But it also cautioned that many people were counted twice. The crisis has exposed deep divisions within the 28-nation European Union over how to distribute the new arrivals - many fleeing conflict in Syria, Iraq and Afghanistan - and how to stem the flow.