At least 43 dead in road accident in southwestern France 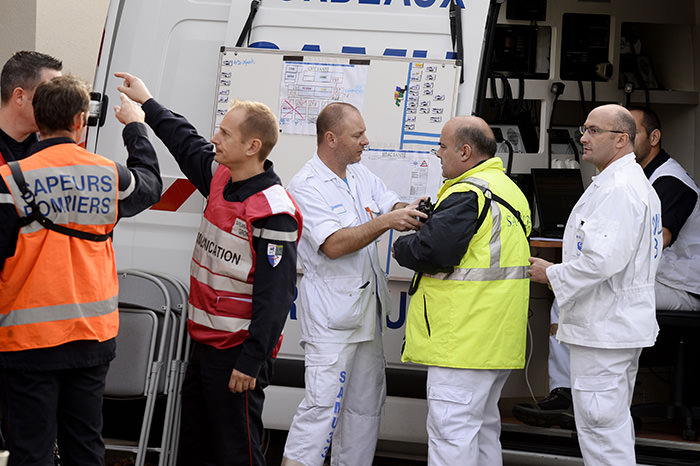 |AFP Photo
by French Press Agency - AFP Oct 23, 2015 12:00 am
At least 43 people were killed when a coach carrying elderly day-trippers collided with a lorry and burst into flames in southwest France on Friday, in the country's worst road accident for three decades.

The coach was carrying members of a pensioners' club on an excursion when it was involved in a collision with the lorry near the village of Puisseguin among the vineyards of the St Emilion region, east of Bordeaux.

Many of the victims were thought to have died in the fire, according to emergency workers and local authorities.

The latest victim to be identified was a "small child" who had been sitting next to the driver of the lorry, a source in the regional prefecture said.
The source could not confirm reports that it was the driver's son. The lorry driver also died, but the bus driver survived.

French television pictures showed the coach had been completely burned, leaving only a charred shell.

"The driver of the lorry appears to have lost control of his vehicle, leaving him stranded in the middle of the road. The bus driver was unable to avoid the accident," Puisseguin mayor Xavier Sublett told reporters.

Locals saw a plume of smoke from several kilometres away.

Many said that part of the road was known to be particularly dangerous.

"I am astonished at the force of the crash. It will take a lot of time to recover all the bodies," said a fireman at the scene.

Eight people, including the coach driver, managed to escape the burning wreckage. Four of the survivors were seriously injured, according to a local official.

"The bus driver was lightly injured. He had the presence of mind to open the doors to allow as many passengers as possible to leave the bus," said Sublett.

The crash is the deadliest in France since August 1982, when 53 people including 44 children were killed in a motorway pile-up.

"The French government has fully mobilised after this terrible tragedy," President Francois Hollande said from Athens, where he was on an official visit.

"We are plunged into sadness due to this drama."

Some 20 fire engines and 60 firefighters were dispatched to the scene on Friday, supported by helicopters. A trauma counselling unit and an information hotline were also set up.