Balkan states to close borders to Syrian refugees 'if necessary' 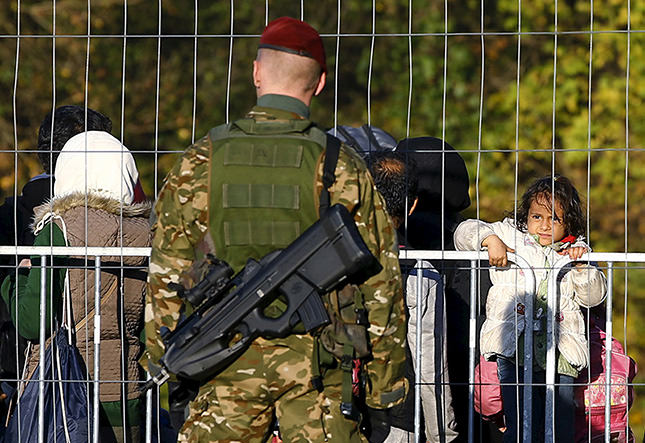 A member of the Sowenian army observes migrants walking towards the Austrian border near the village of Sentilj, Slovenia, October 24, 2015. (Reuters Photo)
by French Press Agency - AFP Oct 24, 2015 12:00 am
Bulgaria, Romania and Serbia on Saturday threatened to close their borders if EU countries to the north stop accepting migrants, as European leaders prepare for emergency talks on the continent's worst refugee crisis since World War II.

Bulgarian Prime Minister Boyko Borisov said the three countries wanted a Europe-wide solution to the crisis but were not prepared to become a "buffer zone" for the tens of thousands of new arrivals.

The Bulgarian, Romanian and Serbian premiers held talks in Sofia on the eve of talks called by European Commission chief Jean-Claude Juncker, who has urged a cross-border approach to a crisis that has seen 670,000 people arrive on Europe's shores this year.

The influx has prompted EU member Hungary to close its borders with Serbia and Croatia -- and Slovenia has threatened to do likewise -- as fears rise that the crisis is bringing Europe's cherished "Schengen" system of borderless travel under threat.

Borisov and his Serbian and Romanian counterparts said the best solution was commonly-agreed action across Europe, but warned that if other EU countries followed Hungary's lead, they would have to act.

"All three countries, we are ready if Germany and Austria and other countries close their borders (...) we will be ready to also close our borders at that very same moment," Borisov said after the talks in Sofia.

"We will not let our nations become a buffer zone of the refugee flows that will become stranded between Turkey and the fences built up from Serbia."

Over past months non-EU member Serbia has been swamped by refugees on their way from Greece and Macedonia to northern Europe, though Bulgaria and Romania have been much less affected.

Hostility towards new arrivals has been growing in Germany and Sweden, Europe's most popular destinations for asylum seekers, lending increased urgency to efforts to get other EU members to accept a greater share of the arrivals.

Police in Sweden said a planned refugee home, around 90 kilometres (60 miles) west of Stockholm, was torched Friday night in a suspected arson attack, while on Thursday a man armed with a sword killed two people in a racist attack at a Swedish school with many immigrant pupils.

Germany, the EU's top economy, is bracing for up to a million asylum applications this year and its resources to deal with the newcomers are under strain.

On Saturday the mayor of Berlin announced that tents would be put up in hangars at the city's old Tempelhof airport to house refugees, as all its shelters were full.

A new law also came into effect tightening German asylum rules for Albanian, Montenegrin and Kosovan nationals in a bid to ease the pressure.

Juncker on Friday praised Chancellor Angela Merkel's policy of solidarity with refugees, which has drawn a heavy backlash at home.

"I appreciate very much that the chancellor does not change course because of opinion polls," Juncker said.
Amnesty International has warned of a humanitarian crisis in the Balkans as thousands of refugees face winter without proper housing. Migrants on the Serbia-Croatia border told AFP on Saturday of bitter cold and little to eat.

Sunday's summit in Brussels will bring the leaders of Macedonia and Serbia together with the leaders of eight EU countries on the frontline of the crisis: Austria, Bulgaria, Croatia, Germany, Greece, Hungary, Romania and Slovenia.

According to German media, Juncker has drafted 16 proposals for the talks, including an undertaking that no country will let migrants through to an adjoining state without first getting the neighbour's agreement.

He will reportedly also float proposals to speed up the expulsion of migrants who have been denied asylum and to withdraw the right of asylum to people who do not register their request in the first EU state where they land.
Last Update: Oct 25, 2015 12:16 pm
RELATED TOPICS