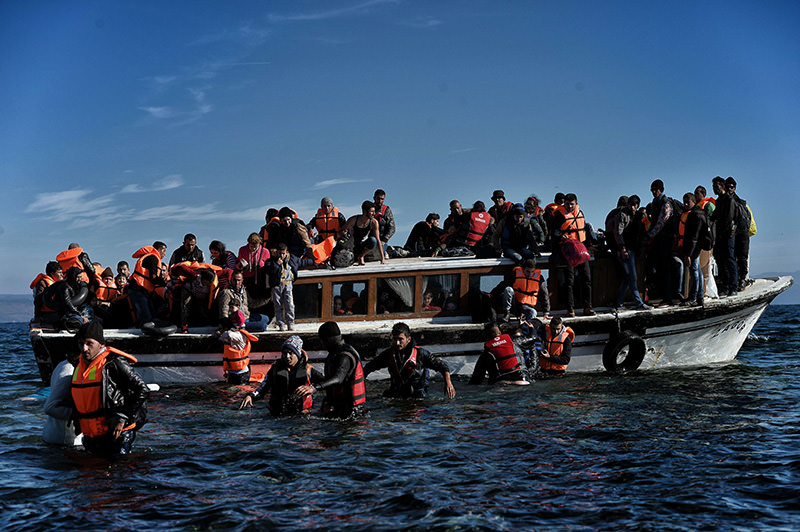 by Daily Sabah with Reuters Oct 26, 2015 12:00 am
European leaders agreed to cooperate to manage migrants crossing the Balkans but offered no quick fix to a crisis that threatens to take more lives as winter sets in and to set Europe's nations against one another.

Meeting in Brussels as another woman and two children died at sea off Turkey, German Chancellor Angela Merkel and Greek Prime Minister Alexis Tsipras met leaders of nine countries on the route from the Aegean to Germany taken this year by half a million people, defying EU borders and unfurling razor wire.

Tsipras chided some EU nations for only looking at ways to keep migrants out and not how to tackle the crisis together. "Unfortunately, until today, it was difficult to find a solution because a series of countries adopted a stance of 'not in my own backyard'," Tsipras said upon arriving at Sunday's summit in Brussels. He also said Turkey bears a special responsibility in the migrant crisis. Tsipras stated that, "at the end of the [migrant] corridor, there is an entrance. So if we will not be able to address the country at the entrance, I am afraid that it will be very difficult to find a solution."

After talks throughout Sunday evening that began with what officials described as a round of leaders "venting" at each other's conduct, the 11 governments issued a pledge to work together, along with a 17-point action plan that includes United Nations-aided accommodation for 100,000 people, half of them in Greece.

"Unilateral action may trigger a chain reaction," the joint statement read - reflecting what is already fact, as states have variously sealed off borders or moved and deposited busloads of undocumented migrants at their neighbors' frontiers.

"Countries affected should therefore talk to each other. Neighbors should work together along the route," the statement said.

Meeting host Jean-Claude Juncker, the president of the European Union executive, said: "We have made very clear that the policy of simply waving people through must be stopped."

Merkel, whose poll ratings are sinking as she has opened Germany's borders to hundreds of thousands of Syrians, called for the meeting just 10 days after the last of several full EU summits devoted to the migration crisis. She said it was urgent to find a humane solution for tens of thousands of people stuck behind closing Balkan borders as autumn turns cold and wet.

"The pictures of the last few days are not in line with our values," she told reporters after extracting agreement from her peers to provide shelter, food and care for people on the move, helped where needed by EU aid and cheap international loans.

"Europe must show it is a continent of values, a continent of solidarity," she said. "This is a building block ... but we need to take many further steps."

She also stressed the need to continue negotiations with Turkey, the main transit country to Europe for not only Syrian and Iraqi refugees but also large numbers of Afghans and Pakistanis viewed in the EU as unwanted economic migrants.

Tsipras said he was satisfied with the outcome. A leftist, who has had a rocky relationship with Berlin and Brussels since his election in January, began months of brinkmanship before a bailout deal in July kept Greece in the euro zone.

In the front line of the migrant wave this year, Greece has been criticized for failing to implement EU law on registering new arrivals. Officials said Tsipras had initially resisted calls for Greece to greatly expand accommodation for asylum-seekers and accept more border guards from other EU states.

However, the final agreement included a Greek commitment to increase to 30,000 by the end of this year the number of places it has to host migrants - officials said it currently has some 7,000-10,000. A further 20,000 people should be sheltered in private accommodation in Greece, the statement said, while another 50,000 places should be available in countries further north.

The United Nations refugee agency UNHCR, whose chief was at the meeting, will work with governments on that program.

Frustrated by the way nearly half a million people have been able to cross Greece largely undocumented this year, other EU states are using a mixture of financial incentive and promises to take in asylum-seekers from Greece - if Athens cooperates and, after weeks of delay, starts registering all who arrive.

Among other elements of the plan, EU member Slovenia will receive 400 extra police to handle an influx of migrants this month following Hungary's closure of its border with Croatia.

Slovenian Prime Minister Miro Cerar, who before the meeting echoed other senior figures in warning that a failure to agree on handling the migration crisis could see the European Union itself unravel, called the deal "a step in the right direction".

He said Juncker's plan to coordinate an exchange of information among Balkan states, of which some are in the EU and some merely in line to join, should help reduce chaos. Angry words across frontiers drawn out of the Yugoslav wars of the 1990s have revived painful memories around the region.

Before the meeting Cerar said: "If we don't deliver concrete action, I believe Europe will start falling apart."

Hungarian Prime Minister Viktor Orban, who has fenced off borders with Serbia and Croatia, was also at the meeting. He has been a sharp critic of Merkel's emphasis on sharing out asylum-seekers across the 28-nation EU according to national quotas and says Europeans should resist mass immigration by Muslims.

On a day when the sweeping victory of Poland's Eurosceptic right in a parliamentary election highlighted a growing popular mistrust of the European Union and open borders, the leaders in Brussels also stressed EU plans to speed up the deportation of those, notably from South Asia, deemed not in need of asylum.

Merkel stressed, however, that lasting solutions to the crisis would take a long time yet.
Last Update: Oct 26, 2015 4:55 pm
RELATED TOPICS