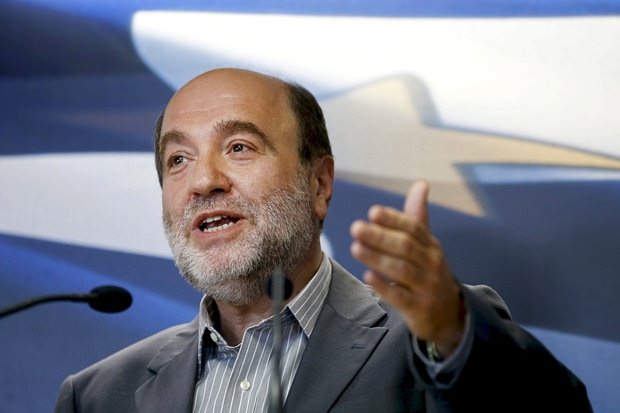 by Daily Sabah with Reuters Oct 27, 2015 12:00 am
Greece's deputy finance minister on Monday got a letter in the post with a bullet in it and a note comparing him to a collaborator with Germany's Nazi forces who occupied the country in World War Two, the Greek finance ministry said.

Prime Minister Alexis Tsipras' leftist government was re-elected in September even though he was charged with implementing austerity measures that he had promised to cancel when he was in opposition.

The Greek government passed a law this month toughening punishment for tax dodgers and has promised to improve revenue collection as part of the bailout conditions.

The deputy minister, Tryfon Alexiadis, who is in charge of tax revenues, said those who had sent the letter were "fascist psychopaths" whose action gave him more courage to keep up the fight against tax evasion and corruption.

"Never in my life, have I been afraid of clashing and fighting against a rotten and corrupted establishment which has brought us to this point," he said in a statement, noting that the culprits will be brought to justice.

The single-page, bold-typed letter read, "Until the hour 0, you and your family will know what fear means," and was signed with a red star by a previously unknown group called "Kokkini Fraxia", loosely translated as Red Faction.

An urban guerrilla group called the Red Army Faction led armed attacks on politicians, industrialists and soldiers in the 1970s and 1980s in then in West Germany. Its logo was a red star with a superimposed automatic pistol.

Greece has a long history of political violence. In 2013, the central bank chief received two bullets and a threatening letter in the post and the finance minister got a similar letter with a bullet, warning him against planned home foreclosures.

Police said they were investigating the threat against Alexiadis.
Last Update: Oct 27, 2015 1:40 am
RELATED TOPICS