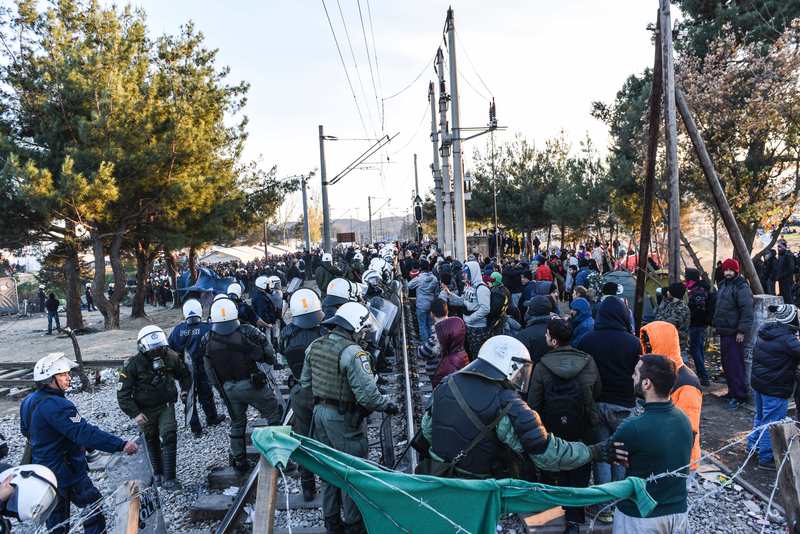 by Anadolu Agency Dec 03, 2015 12:00 am
A 22-year-old Moroccan asylum seeker was electrocuted to death by accident when he touched a power cable after jumping off a train Thursday at the neutral zone between Greece and Macedonia.

According to police, the Moroccan accidentally touched the electric cables after he jumped off a train wagon at a point where immobilized trains stood for days.

Protesters carried the remains of the victim at the border and did not allow an ambulance to take away his body.

This is the second death from electrocution of an asylum seeker since last Saturday at the border between Greece and Macedonia, where about 6,000 refugees remain trapped following Macedonia's decision to allow only people from Syria, Iraq and Afghanistan to transit through its territory.

The refugee crisis has hit Europe hard during the last several months and especially Greece, which is one of the main gateways through Turkey.

About the electrocuted asylum seeker, the socialist party PASOK warned the Greek government that "If you do not take action now, unfortunately, the crisis in Idomeni [at the north Greek border] will be transferred to large urban centers very quickly."

Deputy Minister of Immigration Policy Giannis Mouzalas asked for the activation of the EU civil protection mechanism. "We requested it today and not months ago because we were not able to weigh our exact needs," Mouzalas said.

He assured that the problems at Idomeni would be resolved within four to five days, adding that "there will be no caging migratory flows."

"We'll do it quickly, not with flowers or violence, but with management," he said.

About accusations that Greece resembled an "unfenced vineyard", the deputy minister said that land borders were being managed but "since the refugees enter through the sea borders on a boat, the only option for us is to rescue them."
Last Update: Dec 03, 2015 7:14 pm
RELATED TOPICS