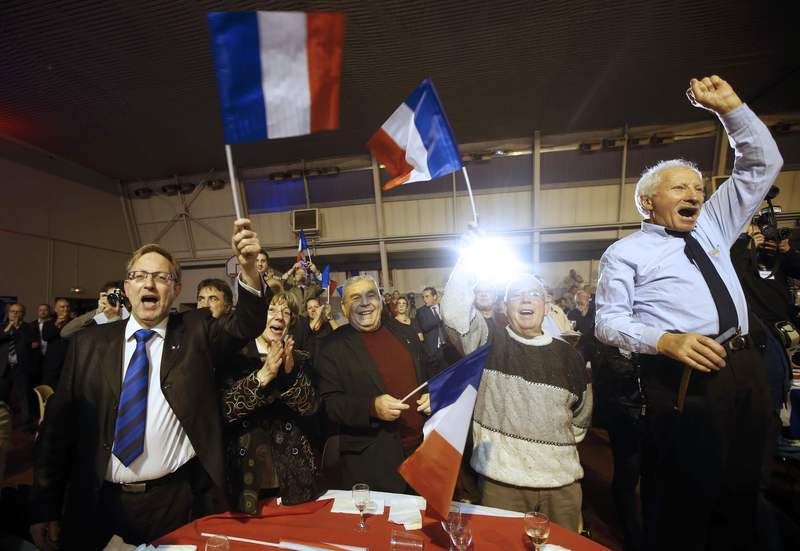 by Anadolu Agency Dec 06, 2015 12:00 am
The far-right National Front is ahead in the first round of Sunday's regional elections in France, held in less than a month after the terror attacks on Paris, exit polls show.

According to early unofficial results, the National Front is leading in 6 out of 13 regions with the party's leader Marine Le Pen, known for her anti-Muslim and anti-immigrant remarks, and her niece Marion Marechal-Le Pen gaining more than 40 percent of votes in the north and the southeast of the country, and 30,6 percent nationwide.

"It's a magnificent result that we will welcome with humility. We are without question, the first party of France," Marine Le Pen said in her post-election speech.

"We have the vocation to achieve the national unity that the country requires," she added.

A grouping of right-wing parties took between 27 and 27.4 percent, the estimates showed, while the ruling Socialist party and its allies took 22.7 to 23.5 percent.

"The verdict of the French tonight is clear," Nicolas Sarkozy, former French president and leader of Les Republicains -- included in the right-wing grouping -- said in his post-election speech.

He added that the results showed the French wanted to bring leaders to power who would not take the Republic backwards. "It has gone backwards too far," Sarkozy said.

He also dismissed any "tactical alliances" for the second round.

According to the interior ministry, the voter turnout was at 43.01 percent at 5 p.m. -- polls remained open till 8 -- meaning less than half of the 45 million registered voters participated.

The voter abstention is estimated at between 49.5 percent and 49.8 percent, according to exit polls.

Sunday's polls were held under tight security and under a state of emergency following the Paris attacks that killed 130 on Nov. 13.