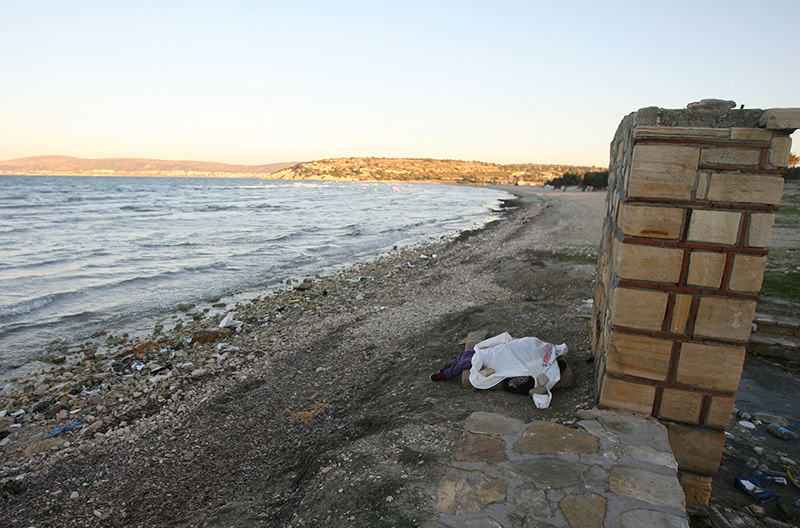 by Daily Sabah with Agencies Dec 07, 2015 12:00 am
As the heartbreak and sorrow caused by the image of drowned Syrian toddler Aylan Kurdi still lingers, another child who drowned in the Aegean Sea washed ashore on the beaches of Çeşme in the western İzmir province.

Initial findings suggested that the girl is of Syrian origin and probably drowned two to three days ago.

Following the investigation by the public prosecutor, the body was transferred to a forensic medicine institution in Izmir for autopsy.

A recent report revealed by UNICEF said that some 185 refugee children have died in the Aegean Sea between Turkey and Greece in 2015, which account for 30 percent of all the deaths.

The image of drowned toddler Aylan Kurdi shot last September gained worldwide attention and brought the lacking public interest to the bleeding wound. However, since then at least 90 refugee children have died in the Aegean Sea in October alone.

One in five of these victims were aged two years old or less. Overall, UNICEF says five percent of the fatalities in the Eastern Mediterranean were under the age of two.

Most of the refugee children who have died this year are from Syria, Afghanistan and Iraq, and were under the age of 12, according to UNICEF.

According to UNICEF statistics, 30 percent of the 3,500 deaths in the Mediterranean Sea this year were children, meaning more than 1,000 youngsters have died in perilous sea voyages in 2015 so far.