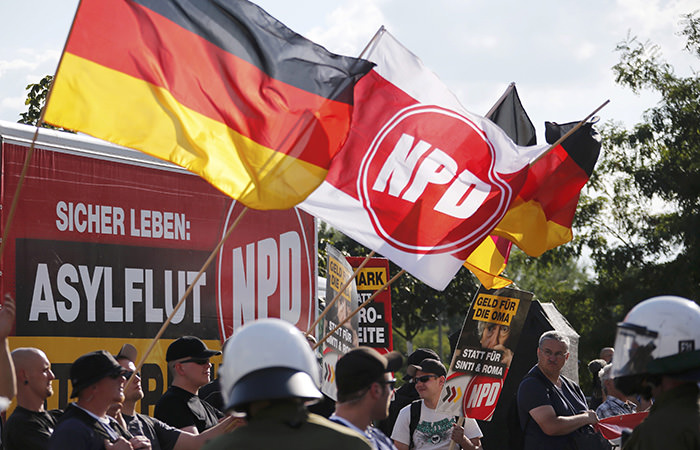 Far-right National Democratic Party (NPD) supporters protesting against a refugee asylum in the Hellersdorf district of Berlin, August 24, 2013 (Reuters Photo)
by Dec 07, 2015 12:00 am
Germany's constitutional court said on Monday it would open proceedings in March on whether to ban the far-right National Democratic Party (NPD), increasing the likelihood that the party branded by critics as neo-Nazi could be outlawed.

Germany's 16 states filed a petition to ban the NPD, which the domestic intelligence agency has called "racist, anti-Semitic and revisionist", in December 2013.

The Karlsruhe-based court said it would now hold hearings on the case between March 1 and 3 next year.

Opening proceedings has raised the possibility that the far-right party could be banned, since the court would have thrown out the suit if it did not believe it was justified.

Banning a political group is difficult in Germany since it is still haunted by memories of Nazi and communist regimes which crushed dissent. A previous attempt to ban the NPD failed in 2003, causing deep embarrassment to the government at the time.

In its 270-page petition, Germany's states noted a "recognizable affinity" between the NPD and Hitler's Nazi party, particularly, they said, in view of its hostility towards foreigners and its anti-Semitism.

It also accused the NPD of stirring up an "atmosphere of fear" in east Germany, where the party is strongest.

Founded in 1964, the NPD won just 1.3 percent of the vote in the 2013 national election. But it sees the refugee crisis as an opportunity to broadcast its anti-immigrant message and a spate of attacks on refugee homes has put it in the media spotlight.

Around 770 attacks were committed against asylum shelters between January and the end of November, compared to 199 in the whole of 2014.