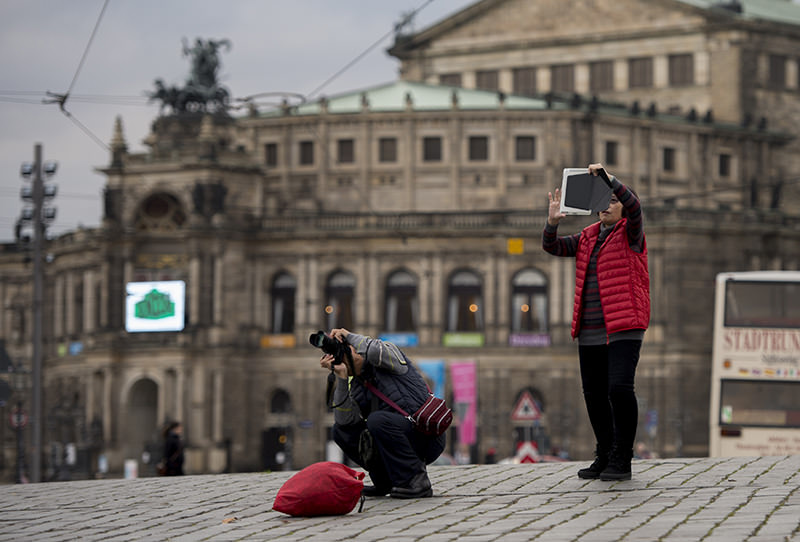 Tourists look at the Frauenkirche ( Church of Our Lady ) in Dresden, eastern Germany, on November 16, 2015 (AFP photo)
by Daily Sabah Dec 07, 2015 12:00 am
Almost all German cities have enjoyed a tourism growth in 2015 but Dresden the hometown of the German anti-Islamic movement Pegida, according to a news report published by German national daily newspaper 'Die Welt' on Dec. 4.

Patriotic Europeans Against the Islamisation of the Occident, abbreviated as Pegida, was founded in Dresden in October 2014 and calls for more restrictive immigration rules, particularly for Muslims.

The number of visits to Dresden has decreased by 2.3 percent between Jan-Sept of 2015, compared to the same period of last year, reported Die Welt. In 2014, on the other hand, there was an increase of 7.6 percent in the number of tourists.

For the first time in five years, the city -- which had previously seen record numbers in tourism -- has experienced a decrease in accommodation spots reserved by domestic and foreign tourists.

Johannes Lohmeier, chairman of the Dresden Tourism Association, reportedly named the situation as a "deep crisis."

Bettina Bunge, the chairman of Dresden Marketing GmbH (DMG) – responsible for conducting marketing for the city of Dresden covering all tourism, scientific and business aspects -- attributed the sharp fall in tourism to Dresden's "negative image" as a result of racist statements uttered in Pegida's marches. She reportedly said that the situation had adversely affected people's business as well as private trips to the city.

Jens-Marten Schwass, the manager of the famous 'Taschenbergpalais Kempinski' Hotel in the city told Die Welt: "Dresden's public image is currently catastrophic." Saying that many reservations at the hotel decreased by 50 percent in 2015 compared to last year, Schwass pointed out the Pegida as a reason. He added that the volume of Christmas shopping was also negatively affected in 2015.