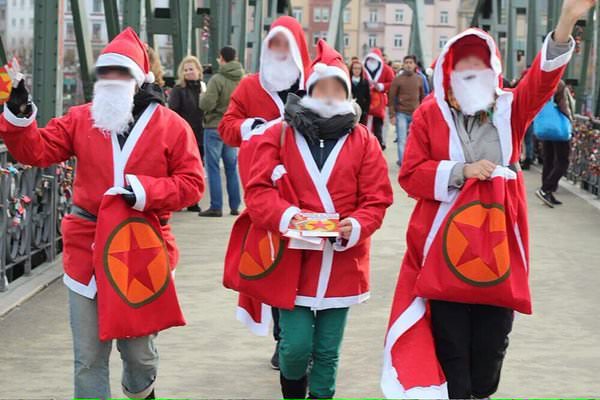 by Daily Sabah with Wires Dec 07, 2015 12:00 am
Sympathizers of the PKK terror organization, dressed as Santa Claus ahead of Christmas, made propaganda of the outlawed group in the western German city of Frankfurt-am-Main on Saturday.

Distributing leaflets and shouting slogans, the group asked Germany to remove the ban on PKK and demanded its leader, Abdullah Öcalan, to be released from prison.

The sympathizers, including German nationals, also held banners to show solidarity with PYD's fight against the Daesh terrorist group in Rojava, the Kurdish name of northeastern regions of Syria mainly inhabited by Kurds.

The group went on with their protest undisturbed in broad daylight, and even in central areas in the city, such as the European Central Bank's headquarters.

The PKK's acting leader Cemil Bayık had earlier apologized from the German nation for their violent protests in the country during the 1990's.

The PKK is designated as a terror organization by Germany, along with various other countries and international bodies like Turkey, the U.S. and NATO.
Last Update: Dec 07, 2015 8:25 pm
RELATED TOPICS