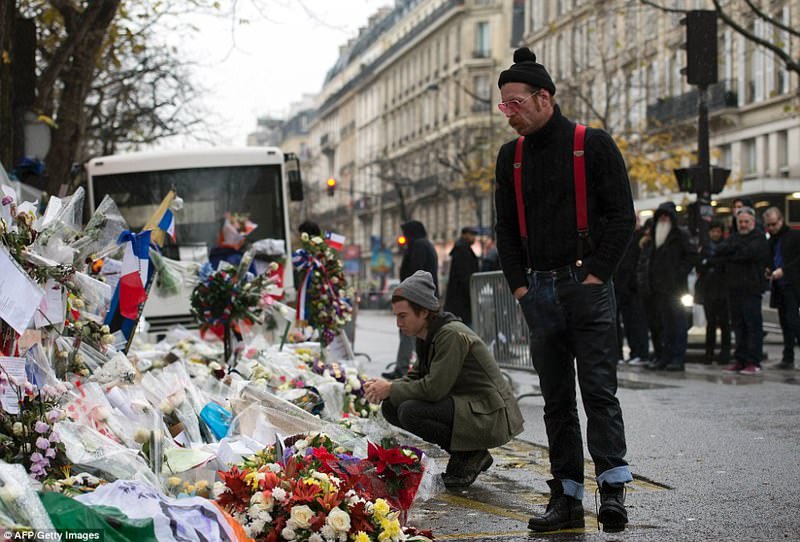 | AFP photo
by Dec 08, 2015 12:00 am
The Eagles of Death Metal band made a return to the Bataclan concert hall in Paris Tuesday, nearly a month after they survived a terrorist attack there in which 90 people died.

Clearly moved by the floral tributes and messages left outside the building, the Californian band spent nearly 15 minutes reading cards left at the scene of the worst atrocity of the November 13 attacks on the city.

As a gentle drizzle fell, lead singer Jesse Hughes cried after placing a single flower on the sea of bouquets spilling out onto the road in front of the venue in eastern Paris.

The band's merchandising manager, Nick Alexander, a 36-year-old Briton, was among the victims.

When the band members turned to leave, passersby applauded them.

The musicians returned to the French capital on Monday night, joining the Irish rock group U2 on stage at the end of their concert in the AccorHotels Arena to belt out a rousing rendition of Patti Smith's "People Have The Power".

As the 16,000-strong audience rose to their feet to cheer them, Hughes shouted, "Paris, we love you all and we will never give up rocking and rolling."

The band had only just begun their concert at the Bataclan when gunmen burst into building and opened fire on the audience.

Before revisiting the scene of the massacre under tight security, Hughes had earlier Tuesday thanked fans and U2 for helping to support the band during the ordeal and vowed to return to play Paris again in February.

"We are incredibly grateful to U2 for providing us the opportunity to return to Paris so quickly, and to share in the healing power of rock 'n' roll with so many of the beautiful people -- nos amis (our friends) -- of this great city," he said in a letter posted on Facebook.

"Thank you to France, and thank you to everyone in the world who continues to prove that love, joy, and music will always overcome terror and evil. We look forward to fighting the good fight on many more fronts very soon, especially when we pick up our tour in 2016," he added.

The Bataclan's owners plan to reopen it at the end of next year and Hughes has said that he wants the Eagles of Death Metal to be the first band to play there.

The band called off their European tour in the immediate aftermath of the attack, but then decided to finish it next year in memory of its slain fans.
Last Update: Dec 08, 2015 6:50 pm
RELATED TOPICS