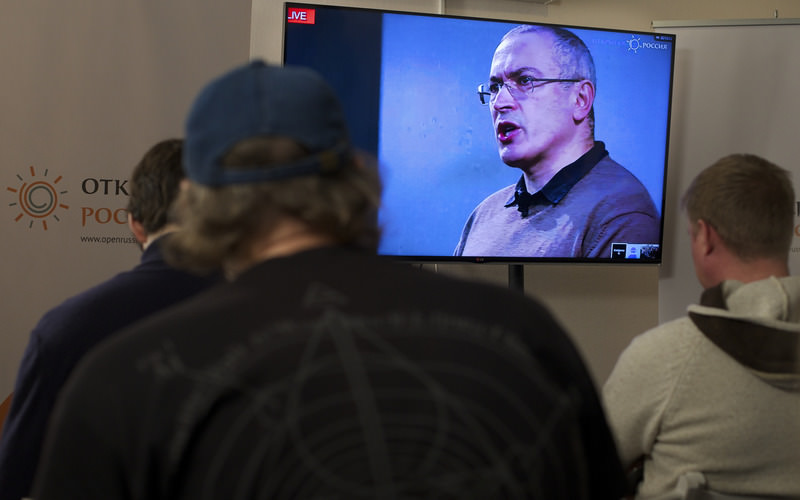 by Dec 09, 2015 12:00 am
Top Kremlin critic and former Yukos oil chief Mikhail Khodorkovsky on Wednesday said a "revolution" was inevitable in Russia and could happen as soon as 2018.

Speaking via videolink from London, Khodorkovsky delivered a damning summary of President Vladimir Putin's rule and announced the intention to prosecute his regime.

"Revolution in Russia is inevitable. The remnants of its reserves and the threat of repressions are only putting off its eventual arrival," he said.
"The question is how can we make this revolution at least relatively peaceful."

Russia has "enough reserves to last until 2017," he said, predicting that when they run out this could trigger economic and political collapse.
"If (Western) sanctions are not lifted by then, there could be problems already in 2018."

The former oil tycoon spent a decade in prison in Russia on tax evasion, fraud and embezzlement charges before being suddenly pardoned by Putin on humanitarian grounds in 2013. He flew out of the country to be with his sick mother and currently resides in London.

Investigators this week summoned Khodorkovsky for questioning as part of a fresh probe into a 1998 murder case and announced that he will be charged on Friday.

Khodorkovsky said the new probe into the murder of a Siberian mayor, for which his former Yukos security chief is already serving a life term, was ordered personally by Putin.

"I know very well that such (an) order was given," he said.

He claimed the recent summons is aimed at distracting the public from Putin's circle's own criminal ties, which opposition activists, independent media and Khodorkovsky's Open Russia group have alleged in recent reports.

"Putin and his circle must answer before society for what they have done in an independent court. I see this as my task," he said.
Putin and his circle have orchestrated a "full-scale overthrow of constitutional rule" in order to keep power, Khodorkovsky said.

Mismanagement and pervasive corruption are depleting the country's economic reserves, he said.

He said he could see early signs of social protests in the country spurred by "the pathological greed of Putin's circle."

Though Khodorkovsky in 2013 told Putin he would not engage in politics, he said Wednesday that he felt he was not bound by this after his mother's death last year.

"I am not interested in politics," he said. But "as a Russian citizen I cannot idly watch what is happening."

"Residents of many countries suffered this type of love, just like hostages taken by terrorists," he said.
Last Update: Dec 09, 2015 9:32 pm
RELATED TOPICS