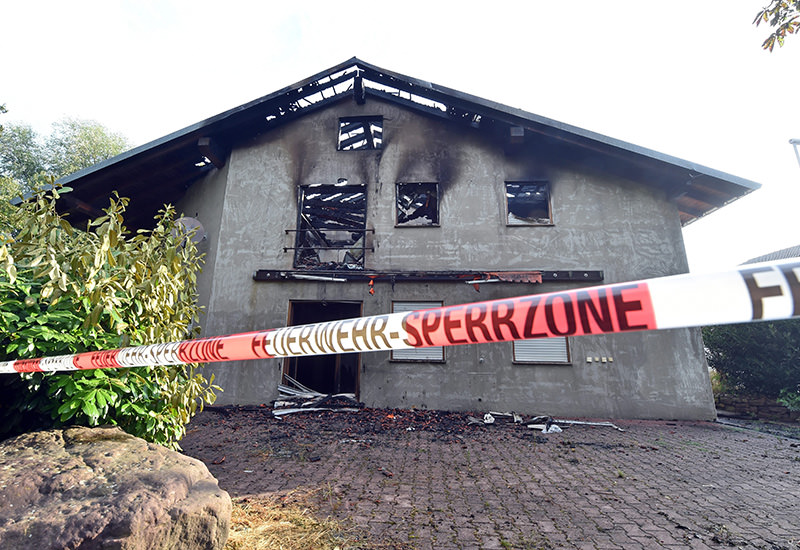 Exterior view on a planned refugees home that burnt down in Remchingen, Germany, 18 July 2015 (EPA photo)
by Daily Sabah Dec 10, 2015 12:00 am
Attacks on refugee shelters have already more than quadrupled to reach 817 in 2015, compared to the previous year, according to a report published on Wednesday by the country's Federal Office of Criminal Investigation (BKA). The minister of justice has reportedly called the situation as "shameful", and called for a tougher legal response.

The investigation bureau said that by early December, 817 offenses were reported, among 130 which were violent crimes.

In the vast majority of offenses, the offenses were undertaken to damage to property, to conduct propaganda and incitement. Some 68 of the cases constituted as arson attacks, according to police reports, whereas this number was only six last year. According to BKA, at least 733 of the incidents were right-wing motivated.

Federal Justice Minister Heiko Maas called the sharp rise in such arson attacks on refugee shelters in 2015 as "shameful", according to the German newspaper 'Funke Mediengruppe'.

Addressed to the perpetrators of the Minister of Justice said: "There cannot be any justification, no understanding and no excuse for such cowardly acts." Maas called for a tougher legal response, in which the perpetrators were "with all our strength" identified and held accountable.
Last Update: Dec 10, 2015 3:00 pm
RELATED TOPICS