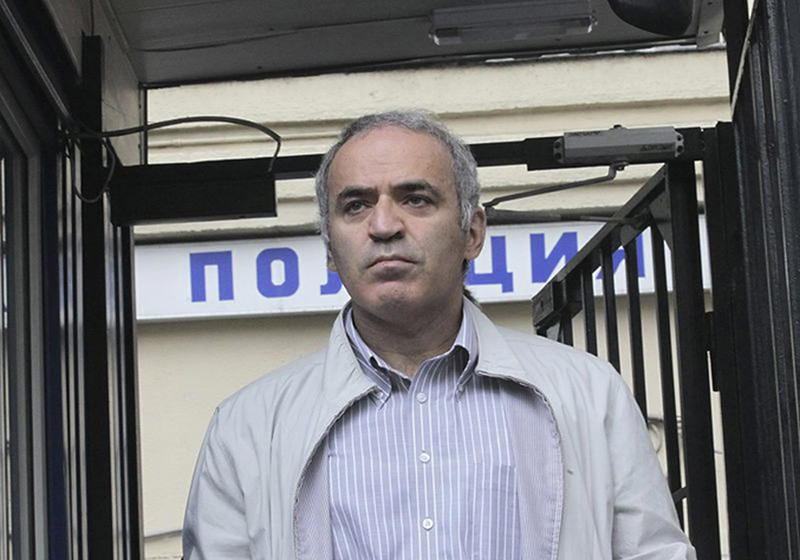 "It's very short-sighted, very stupid, very provocative and also bad for Russia," Kasparov said in an interview with Anadolu Agency in Berlin.

"Unfortunately, Putin thinks he can sacrifice the interests of Russia for his own short-term gains," he added.

Kasparov warned that economic sanctions towards Turkey would soon backfire and have a serious impact on the Russian economy.

"Putin doesn't have resources but he imposes sanctions that hurt the Russian people. It is quite serious," he said.

"Putin has been creating a huge crisis in Russia because Russia already cut economic ties with many European countries. Now, with these sanctions towards Turkey, the Russian tourist industry is basically dead, most of it," he added.

Following Turkey's shooting down of a intruding Russian military jet over the Turkey-Syria border last month, the Kremlin imposed a range of unilateral sanctions, including a ban on food imports, an end to visa-free travel and calls for Russian tourists not to visit the country.

Kasparov, an outspoken critic of the Kremlin, criticized Putin for following a dangerous policy in the region, risking ties with key players, and presenting himself as a successful world leader to the Russian people, using a vast number of propaganda channels and media outlets.

"It is the same policy he used against European nations. Putin's survival strategy in Russia is based on virtual reality. He should be seen as a leader who reacts? He made big statements saying that we could go into war. But of course he is not going to fight a NATO country," he said.

The Nov. 24 downing of the Russian SU-24 bomber came after its crew ignored repeated warnings from the Turkish military and violated Turkey's airspace. Russia denies the claims.

Kasparov claimed that Russia's military operations in Syria were not primarily aimed at fighting Daesh, but mainly serving for the short-term goals and particular interests of the Russian leadership.

"Putin needs chaos to survive. He doesn't care what a great chaos would that be, whether it is [in] Ukraine, the Baltics, Azerbaijan, Armenia or in Syria," he argued.

"Syria is an ideal place because it is a total chaos. And also he has been testing the resolve of the NATO countries," Kasparov said, adding that most of Russia's air strikes do not fall on Daesh, but hit Turkmen or moderate opposition groups.

Kasparov also criticized U.S. and European countries for abandoning the Middle East region and leaving a political vacuum, which has led to the current situation:

"The Islamic State [Daesh] still exists because nobody is ready to take the action that is needed.

"You must have boots on the ground. You need some American, some European troops on the ground. Everybody knows that pretending that you can solve the problem by airstrikes is not a solution," he said.

Kasparov also argued that Western policies of dialogue and cooperation with Putin have been naive and proved to be unsuccessful so far. He favored stricter economic sanctions against Russia, to force Moscow to abide by the rules of international law and respect the sovereign rights of its neighbors.

"You have to stop the dictator. The sooner you do it the better chances you have. Now he is using the same language of the nuclear war. It is blackmail," Kasparov said.

Kasparov urged Western countries to develop a unified, strong and consistent foreign policy towards Russia, based on moral principles.

"It is very important that the West comes up with a plan," Kasparov said, but he also added: