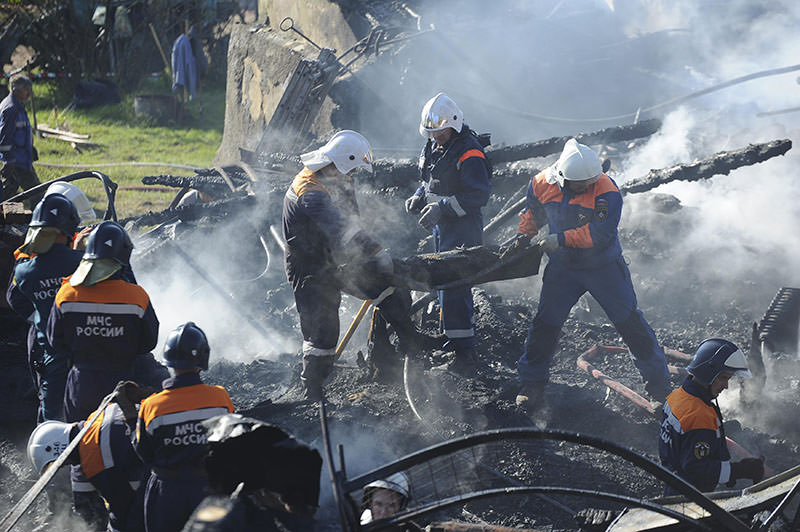 Representational image -- From the debris of a psychiatric hospital destroyed by fire in the Novgorod region town of Luka September 13, 2013 in Russia (Reuters)
by Dec 13, 2015 12:00 am
Twenty-three psychiatric patients, most of them elderly, died when a fire ripped through their care facility in southern Russia Saturday night, in the latest tragedy to hit mental health hospitals in the country.

"The bodies of 21 people have been found, two more died in hospitals," said the emergencies ministry on Sunday, adding that a further 23 people were hospitalised.

Seventy patients and four nurses were in the Soviet-era ward when the fire broke out shortly before midnight (2100 GMT) Saturday at the hospital in the village of Alfyorovka, in the southern Voronezh region.

Most of those who perished were aged in their 60s and 70s, although some were in their 40s and 50s, according to a list of patients released by the emergencies ministry.

The state-owned Rossiya 24 rolling news channel said patients had been given tranquillizers as part of their medication before the fire broke out.

"They simply did not wake up," a correspondent reported from the scene, saying they choked on noxious smoke.

Igor Kobzev, chief of the Voronezh regional branch of the emergencies ministry, said that "the epicentre of the fire was located in a place where bedridden patients were."

The fire gutted the hospital building made of brick and wood, with footage showing firefighters still combing through the smoking ruins in light snow.

It took more than 440 firefighters and emergency workers around three hours to bring the fire under control.

The Investigative Committee, which reports directly to President Vladimir Putin, said it opened a criminal probe into the deaths on suspicion of negligence.

There was no immediate reaction from the Kremlin but Emergencies Minister Vladimir Puchkov went to the scene to oversee the response to the tragedy and conduct a meeting on fire safety.

The blaze was the latest tragedy to hit a psychiatric institution in Russia, where outdated Soviet-era infrastructure is still in widespread use and managers often take a lax approach to fire safety.

Critics say such deadly fires, which often claim the lives of some of the most vulnerable people in Russia, are a source of embarrassment for the Kremlin, noting authorities have learnt little from past tragedies.

Experts are looking into what triggered the blaze at the psychiatric ward in Alfyorovka, investigators said, adding searches were also being conducted as part of the probe at the regional department for social protection.

Medical personnel said patients did not have access to matches or lighters.

Nurse Nadezhda Sukhareva said patients were allowed to smoke but staff would light their cigarettes for them outside the building.

"There's no way we would give them matches," she said in televised remarks.
Activist Konstantin Rubakhin, whose father was born in Alfyorovka, said the hospital had been a bleak place.

"It was hard to step inside these wooden barracks encircled by a fence. But I would make tours to such places mandatory for governors," he wrote on Facebook.

A fire at a psychiatric hospital in northwest Russia in September 2013 left 37 people dead, while a blaze in a psychiatric ward near Moscow in April of the same year killed 38.

In 2009, 156 people were killed in a nightclub fire in the city of Perm, some 1,200 kilometres (700 miles) east of Moscow in one of the deadliest accidents in Russia's modern history.