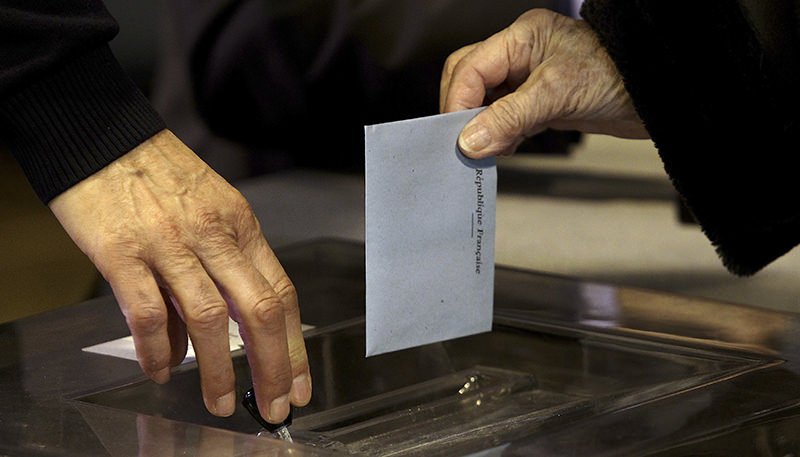 France's far-right National Front (FN) failed to win a single region in elections Sunday despite record results, as voters flocked to traditional parties to keep them out of power.

With presidential elections due in 2017, the anti-immigration FN had hoped the regional polls would act as a springboard for leader Marine Le Pen. But despite a best-ever national vote tally for the FN, she was trounced by the right-wing opposition in the northern Nord-Pas-de-Calais-Picardie region after the ruling Socialists pulled out of the race before the second round. Her 26-year-old niece Marion Marechal-Le Pen was also clearly defeated by the right-wing grouping in the southern region, which includes the glitzy resorts of the Cote d'Azur, despite dominating the first round last week. The party had topped the vote in six of 13 regions on December 6, with a 28 percent national share, being propelled by anger over the struggling economy and fears created by last month's extremist attacks in Paris that left 130 dead. But exactly a month on from those attacks, voters turned out in force – some 58 percent took part, up from 50 percent in the first round – and once again trounced the FN when it came down to the wire.

The ruling Socialists of President Francois Hollande won in five regions, while the center-right alliance of his predecessor, Nicolas Sarkozy, took seven. Nationalists won in Corsica and one of the biggest upsets on Sunday came in the Paris region, which shifted from left to right for the first time in 17 years.

Socialist Prime Minister Manuel Valls warned that despite the result "the danger of the far-right has not been removed, far from it." Sarkozy, leader of the Republicans party, praised the voters who turned out on Sunday but said "the warnings" of the first round must not be forgotten.

The front page of conservative daily Le Figaro announced "The right wins, the left holds up, the FN falls," but the Catholic newspaper Le Croix was more succinct, saying only "Everybody loses." In an editorial titled "Not a victory but the absence of defeat," left-wing Liberation said it was fear of the far-right which had mobilized the left, rather than any renewed enthusiasm for the Socialist Party. Final results showed Le Pen scored around 42 percent compared to nearly 58 percent for her right-wing rival Xavier Bertrand in the economically depressed north. Her niece took around 45 percent of the vote to nearly 55 percent for her right-wing rival in the FN's traditional stronghold in Provence-Alpes-Cote-d'Azur. Both women had easily won the first round.

In a combative speech to supporters after polls closed, Le Pen said "nothing can stop us now." "In its northern and southern bastions we've eradicated the evil-doing Socialist Party," she said. "By tripling our number of councilors, we will be the main opposition force in most of the regions of France," she added.

The FN has topped European and local polls over the past two years, bolstering Le Pen's claim that it is now "the first party of France." The party also recorded its best-ever score Sunday, with 6.8 million votes nationally, up from just over six million in the first round and 6.4 million for Marine Le Pen in her 2012 presidential bid, when overall turnout was considerably higher. But the results showed once again that the party struggles in the deciding round, as mainstream voters gang up to keep it from power, repeating the trend of 2002 when voters switched to Jacques Chirac in a presidential run-off against Marine's father, Jean-Marie Le Pen.

The FN argues that the political maneuvering by the main two political parties demonstrates they are two sides of the same coin and that the far-right offers the only real political alternative. "Frankly, I'm voting against the FN in the interests of my family," said Issa Kouyate, a 59-year-old voter of Senegalese origin, as he cast his ballot in the southern city of Marseille, where a high proportion of citizens are of immigrant background. "There's danger," said Kouyate, describing the FN's 40-percent score in the region's first round as "a time bomb."

Le Pen has reaped the rewards of her efforts to "de-demonize" the party bequeathed by her father, but it retains a stridently anti-immigrant edge. France's regions have recently been consolidated and they have powers over areas such as transport, schooling and local business.

Le Pen was riding high after an unprecedented wave of refugee into the continent and extremist attacks, which killed 130 people in Paris. She has long been accused of fomenting Islamophobia. France is home to the largest Muslim population in Europe, estimated at between 4.5 million. The French Muslim community represents approximately 6 percent of the total population of the 58.5 million that live in France.