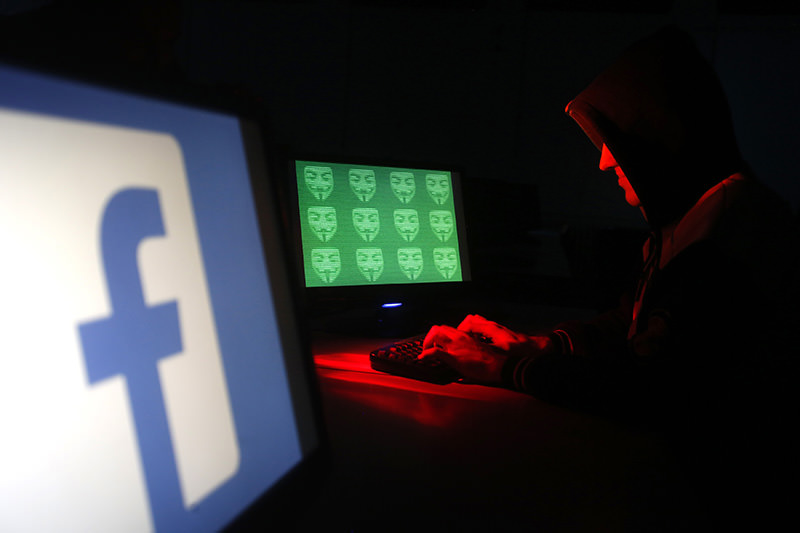 Man poses in front of on a display showing a Facebook logo and the word 'cyber' in binary code, in this picture illustration taken in Zenica December 27, 2014 (Reuters Photo)
by Dec 15, 2015 12:00 am
Facebook and Google agreed Tuesday to abide by German laws on hate speech on their social networks in Germany, responding to complaints by the government that they are too slow to take down xenophobic abuse posted online.

At a meeting with Justice Minister Heiko Maas, the mainly US-based portals agreed that they would not merely apply their own terms of service, but also make it easier for users to cite German law to challenge the legality of remarks.

As the European migration crisis unfolds, users say far-right extremism is becoming increasingly common in German-language contributions to Facebook, Twitter and YouTube. Maas had asked the firms for an action plan to deal with the problem.

This will include "user friendly mechanisms" to report hate speech and bans on the accounts of offenders.

Germany has stricter controls on sedition than many other nations and allows no leeway on glorification of the Nazis, use of their swastika symbol or Holocaust denial.

German public prosecutors have already brought people to trial for anti-migrant remarks on Facebook, even by those using pseudonyms, but Berlin has complained that some online companies place their terms of service above German law.

"What's important is that German law will be applied, and to a single standard, not just the terms of service as was the case in certain instances before," said Maas in Berlin.

Richard Allen of Facebook Europe said the aim would now be to take down content within 24 hours of it being flagged, but this might not be always possible at times of heavy posting, such as just after last month's terrorist attacks in Paris.

Google Germany's chief legal officer Arnd Haller said Google had always reviewed complaints in Germany by the standards of both its terms of service and German law.

Maas set up a working party with Google, Twitter and Facebook in September to discuss how to stop hate speech.
Last Update: Dec 15, 2015 6:48 pm
RELATED TOPICS