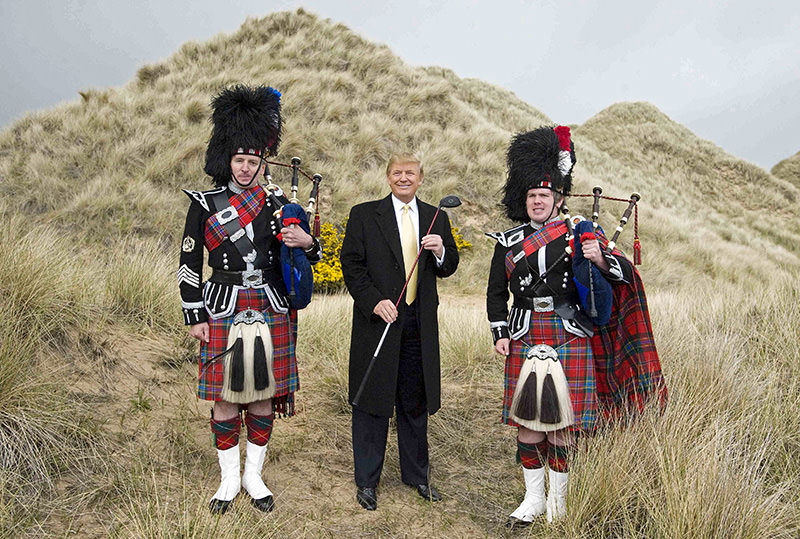 by Dec 16, 2015 12:00 am
United States presidential hopeful Donald Trump lost a legal bid Wednesday to stop a planned wind farm near his golf resort in Scotland, with his company calling the ruling "small-minded and parochial."

Trump has fought the Scottish government's decision to grant planning permission to the 11 turbine development since 2013, arguing it will spoil the view at his Menie Estate golf resort in Aberdeenshire in northeast Scotland.

Britain's Supreme Court judges in London dismissed the appeal of the Republican front runner, who had already lost previous challenges in the Scottish courts.

A spokesman for the Trump Organisation called the verdict "extremely unfortunate," and said the wind farm would "completely destroy the bucolic Aberdeen Bay." "History will judge those involved unfavorably, and the outcome demonstrates the foolish, small-minded and parochial mentality [that] dominates the current Scottish government's dangerous experiment with wind energy," the spokesman said. "We will evaluate the court's decision and continue to fight this proposal on every possible front."

Scotland's Energy Minister Fergus Ewing welcomed the judgement and said it would help position oil city Aberdeen "as the energy capital of Europe and a world energy center." Backers of the wind farm say it will produce enough energy to power 68,000 households over a year.

But Trump has warned he could cancel plans to further develop the golf resort if the green light is given to the wind farm, developed by the European Offshore Wind Deployment Centre and a joint project by Vattenfall Wind Power and Aberdeen Renewable Energy Group.

Relations between Trump and Scotland, where his mother was from and where he has two golf courses, have soured after he called for a ban on Muslims entering the U.S. in his campaign to be the Republican candidate for the 2016 U.S. presidential election.

Scottish First Minister Nicola Sturgeon revoked Trump's membership of the GlobalScot business network and said he was no longer fit to be a business ambassador for Scotland, and Robert Gordon University in Aberdeen revoked an honorary doctorate it gave Trump in 2010.

More than 560,000 people have signed a petition calling on the government to ban Trump from the U.K. in the backlash – making it the most popular petition ever on the British government's petition website.

Trump accused British politicians of being ungrateful for his investment in the country in response. "I have done so much for Scotland," he wrote in Scottish regional newspaper The Press and Journal last week. "The U.K. politicians should be thanking me instead of pandering to political correctness." The billionaire property tycoon could still continue to fight the project if he chooses to take the case to the European Court, according to lawyer Shabana Anwar, a specialist in planning laws for energy projects.
Last Update: Dec 16, 2015 3:30 pm
RELATED TOPICS