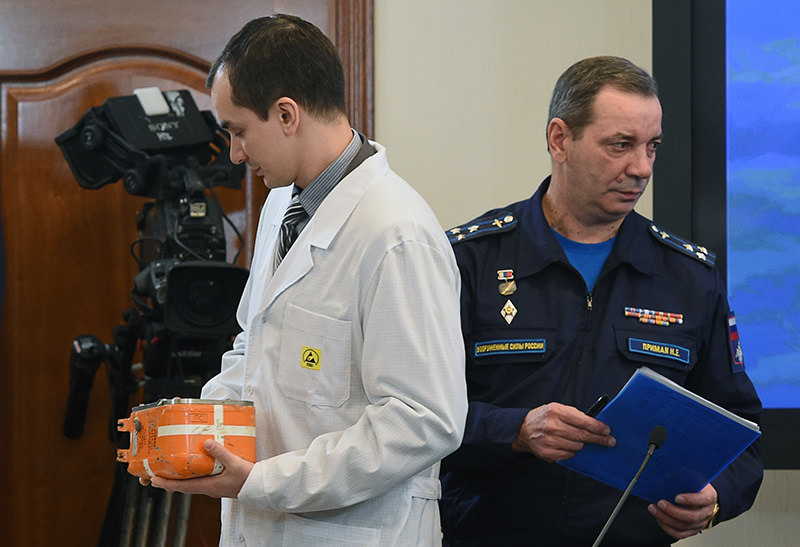 A specialist takes away the flight recorder from the Russian Sukhoi Su-24 bomber in Moscow on December 18, 2015 (AFP photo)
by Daily Sabah with Agencies Dec 18, 2015 12:00 am
Russia on Friday began examining the black box of its warplane that was shot down by Turkey, contesting Ankara's claim it had violated Turkish airspace.

The Russian SU-24 warplane was shot down on Nov. 24 while in Turkish airspace after repeatedly ignoring warnings that it was breaching the territory. Russia, on the other hand, insists that the plane was in the Syrian airspace.

Deputy Commander of the Russian Air Force Lt. Gen. Sergei Dronov told reporters on Friday that Moscow has invited 14 countries to send their experts to examine the Su-24's black box, which was recovered by Russian and Syrian forces from the area in opposition-controlled northern Syria.

Only British and Chinese experts have agreed to examine the data. Dronov also said unidentified "US citizens" were also participating in the procedure, without elaborating on their capacity.

Russian television on Friday aired an hour-long live broadcast from the lab as Russian engineers unsealed then opened several layers of the data recorder with British and Chinese experts looking on.

Wearing lab coats, technicians used screwdrivers, drills, and even a vacuum cleaner as they opened the device under the watchful eyes of military personnel and dozens of journalists.

Dronov said the data from the recorder will be released on Monday.

The Russian President Vladimir Putin said previously that an analysis of the black box would help determine the downed jet's flight path and position, which Ankara and Moscow have disagreed upon.

"Whatever we learn (from the black box) won't change our attitude to what the Turkish authorities did," Putin said.
Last Update: Dec 18, 2015 11:06 am
RELATED TOPICS