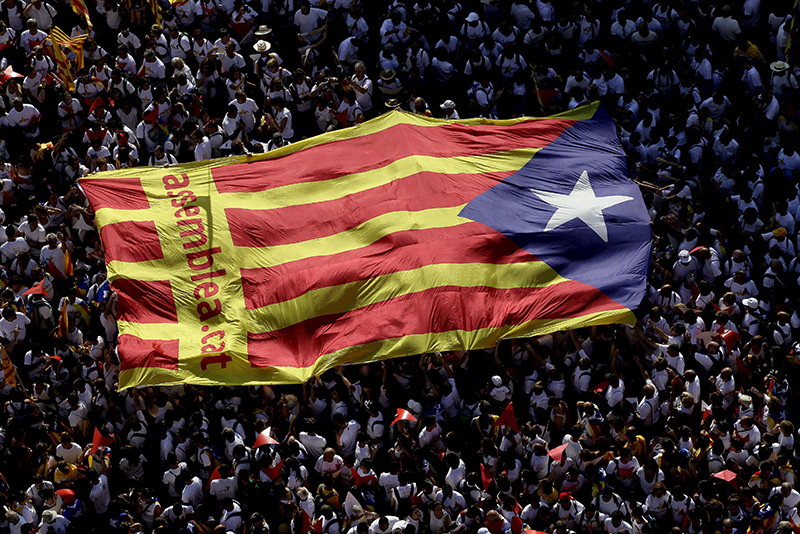 Thousands attend the gathering to support Catalonia's independence on occasion of the Diada Day in Barcelona, Spain, 11 sep 2015. (EPA Photo)
by Dec 19, 2015 12:00 am
Catalonia's bid for independence from Spain has thrust the region's separatist movement to the forefront of Sunday's general election, forcing parties to come up with a range of proposals on how best to meet its demands.

Years of inaction by Prime Minister Mariano Rajoy's conservative government, whose ruling Popular Party refused any form of negotiation or compromise with the separatists, "have caused a lot of harm," says Catalan historian Andreu Mayayo.

Backed by hundreds of thousands of protesters, a majority of lawmakers in the regional parliament have called for a Scotland-style referendum on self-determination -- a demand that has systematically been rejected by Rajoy.

One of Spain's 17 semi-autonomous regions with its own language and customs, Catalonia already enjoys a large degree of freedom in education, health and policing but it wants more, particularly where taxation is concerned, complaining it pays more to Madrid than it gets back.

A 2010 decision by Spain's Constitutional Court to water down a statute giving the wealthy, 7.5-million-strong region more powers has added fuel to the fire.

From 20 percent five years ago, support for independence has shot up to more than 40 percent.

He formed the Together for Yes coalition that went on to win an absolute majority in the regional parliament with the support of CUP, another more radical separatist party.

In November, pro-independence lawmakers approved a resolution launching a process for independence they say will culminate in 2017.

The resolution was later annulled by Spain's Constitutional Court but Catalonia's government has vowed that the motion is here to stay, creating a deadlock ahead of Sunday's vote.

Rajoy and his three main rivals have all broached the issue during the election campaign, putting forward starkly different solutions.

Anti-austerity party Podemos, for one, has said it would allow an independence referendum, like those held in Scotland in 2014 and in Quebec two decades before that, both of which resulted in "No" votes.

The Socialists have suggested implementing a US-style federal state, while the centrists at Ciudadanos -- which emerged in 2006 in Catalonia to fight nationalism -- want to re-visit the powers given to Spain's regions.

Most of these measures, though, would imply a change to Spain's 1978 constitution, which underpinned the country's transition to democracy after decades of dictatorship under Francisco Franco.

"Once a new government is formed in Spain, we will without a doubt have to talk" to find a solution, Rajoy said Thursday.

Spain's constitution says two-thirds of the lower-house Congress and upper-house Senate would have to approve a process for change, following which new elections would be called, said political analyst Jaume Lopez.

After that, two-thirds of the newly-formed chambers would have to give their seal of approval, and a national referendum be organised.

"The chances are very slim," Lopez says -- and Gabriel Rufian, a pro-independence activist standing for office on Sunday, agrees.

"To change the Spanish Constitution we need the seven dragon balls and a unicorn's blood," he said recently, in reference to a famous Japanese manga series and Harry Potter novels.

But for Mayayo, the time of non-action appears to have come to an end.

"There will have to be a constitutional reform," he says.

On the streets of Barcelona, passers-by agree that something needs to be done.

Toni Duran, a 48-year-old employee at an insurance company, says the government had ample time to initiate reforms.

But others like Laura Alvaredo, a 26-year-old designer, believe the situation can still be salvaged.

"I'm going to vote for Podemos," she says.

"I'm not a separatist but until there is a referendum no one will stop talking about this and problems will never be properly solved."

Polls show Podemos topping the poll in Catalonia on Sunday with Ciudadanos close behind.

"Some may see Podemos as a good strategic vote to put pressure for a referendum," says Lluis Orriols, a political scientist at Madrid's Carlos III University.

But national polls also predict that the PP will win overall, though without an absolute majority, which may see the anti-independence Ciudadanos party play the role of kingmaker.

"A PP-Ciudadanos pact would be the worst hypothesis," says Jordi Matas, politics professor at the University of Barcelona.

"There would not be much action over Catalonia and that could further frustrate those who still hope for an agreement between the Catalan government and Madrid."
Last Update: Dec 20, 2015 12:02 am
RELATED TOPICS