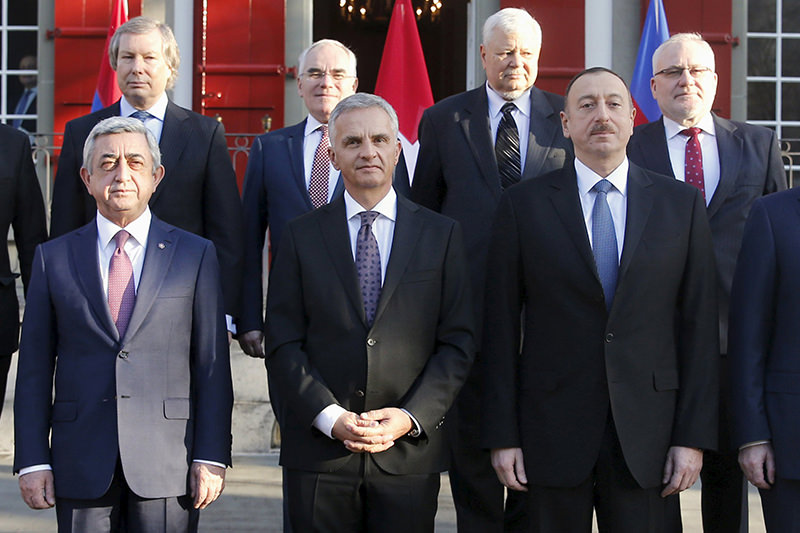 President Serzh Sarksyan of Armenia (L) and President Ilham Aliyev of Azerbaijan (R) meet for talks on the Nagorno-Karabakh conflict Dec 19,2015. (REUTERS Photo)
by Dec 20, 2015 12:00 am
The presidents of Armenia and Azerbaijan met in Switzerland on Saturday in hopes of making progress on a peaceful resolution to a deadly, two-decade-old conflict that has left some 30,000 people dead.

President Serzh Sarksyan of Armenia and President Ilham Aliyev of Azerbaijan were in the Swiss capital of Berne for talks on the Nagorno-Karabakh conflict at the invitation of Swiss Foreign Minister Didier Burkhalter.

The two leaders concluded talks by about noon, according to Swiss Foreign Ministry officials.

Burkhalter said he used the meeting to urge Sarksyan and Aliyev to pursue a "comprehensive negotiation process" that reinforces dialogue while refraining from acts of violence or provocation that have repeatedly brought the two sides to the brink of war.

"The South Caucasus is a priority region of Switzerland's peace-policy commitment," Burkhalter's office said after the meeting concluded.

The Organization for Security and Cooperation in Europe (OSCE), the 57-country group that is helping coordinate the peace talks, said separately that both presidents expressed concern about the violence, including civilian casualties caused by heavy artillery.

"The presidents confirmed their readiness to continue engagement on proposals regarding a settlement currently under negotiation," the OSCE said in its statement.

According to Armenia's Foreign Ministry, the last meeting of the two presidents to discuss the dispute was in Paris in October 2014.

Nagorno-Karabakh, which lies inside Azerbaijan but is controlled by ethnic Armenians, has run its own affairs with heavy military and financial backing from Armenia since a separatist war ended in 1994.

The conflict over Nagorno-Karabakh broke out in the dying years of the Soviet Union. Efforts to reach a permanent settlement have failed despite mediation led by France, Russia and the United States. Aliyev and Sarksyan have had several meetings before, but with no tangible results. Oil-producing Azerbaijan, host to global oil companies including BP Plc, Chevron Corp and ExxonMobil Corp, frequently threatens to take the mountain region back by force, and is spending heavily on its armed forces.

Clashes around Nagorno-Karabakh are stoking fears of a wider conflict breaking out in the South Caucasus, which is crossed by oil and gas pipelines.

Several soldiers from both sides, who accused each other of provoking the confrontation, were killed in the past week.

There is sporadic violence along the front line. In August, Azerbaijan's Defence Ministry and Nagorno-Karabakh's Defence Ministry offered competing accounts of a violent exchange that left several soldiers from both sides dead or wounded.