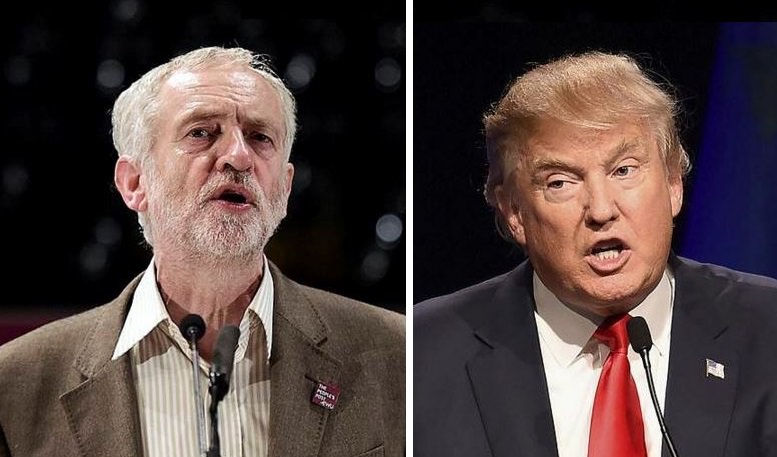 by Daily Sabah with AA Dec 20, 2015 12:00 am
Labor Leader Jeremy Corbyn invited on Sunday the controversial U.S. Republican presidential candidate Donald Trump to Finsbury Park Mosque to see Islam in the U.K. for himself.

The invitation came in an interview he gave to the Huffington Post UK, to mark his first 100 days as Labor leader.

Trump's comments on banning Muslims from entering the U.S., and his remarks regarding Muslims in the U.K., have caused global outrage. In the U.K., more than half a million people have signed a petition calling for the billionaire to be barred from entering Britain, where he has business interests.

On Dec 8, a day after he expressed support for banning all Muslim immigration, Trump said parts of London were "so radicalized" the city's police were "afraid for their own lives".

In Sunday's interview, Corbyn said: "I wouldn't ban him from coming to the U.K."

"If Donald Trump wants to come to Britain, absolutely fine, he can come and join me in Finsbury Park Mosque. And then he can come to the synagogue afterwards. We can have a chat there. We manage to have a coherent, multi-faith, multicultural society in London, in Birmingham, in Leicester, all parts of this country. He's welcome to come and see. He might learn something," he added.

The Labor leader also warned American voters against the Islamophobic candidate's idea of somehow banning Muslims from entering the U.S., calling it "offensive" and "absurd".

Trump has been a frontrunner in the race to become the Republican Party's candidate in the 2016 presidential election. His campaign has been filled with provocative statements, often about immigrants from neighboring Mexico and refugees from Syria or other Muslim countries.
Last Update: Dec 20, 2015 9:24 pm
RELATED TOPICS